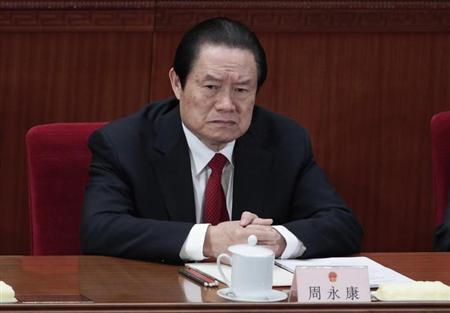 Challenging recent claims in the South China Morning Post, Reuters reports that former security chief and Politburo Standing Committee member Zhou Yongkang is not under investigation for corruption. Last week’s reports closely followed the trial of Zhou’s former protégé, fallen Chongqing Party chief Bo Xilai, for corruption and abuse of power. While Zhou himself may not be in the crosshairs, Reuters’ sources agree that he seems to be under indirect political attack. From Benjamin Kang Lim and Ben Blanchard:

“Zhou has not been ‘shuang gui‘,” one source told Reuters, referring to a form of internal investigation in which a suspect is required to confess within a prescribed time and place.

“He was merely asked to assist with the corruption investigation,” the source said. All three sources declined to elaborate when asked if the probe involved Zhou’s family members or allies at state oil giant China National Petroleum Corp, of which he was president in the 1990s.

“Unlike Bo, Zhou is unlikely to be arrested or put on trial” even if he is implicated in the probe, the source added.

[…] While dismissing the reports, the sources said the investigations of his allies did appear aimed at marginalizing Zhou, 70, who retired as security tsar and from the Communist Party’s all-powerful Politburo Standing Committee during a sweeping leadership reshuffle last November. [Source]

At South China Morning Post, Tom Holland writes that the focus on Zhou’s allies and associates in a narrow “petro-purge” undermines the credibility of Xi Jinping’s crusade against corruption:

To prove they really mean business, they should consider turning over a few stones in China’s mining industry, in its telecommunications and electrical equipment sectors, and, above all, in its property development business.

Corruption, cronyism and nepotism exist on a vast scale across these sectors, as well as in the petroleum industry, because China’s economic model makes it all too easy for senior officials to trade on their positions to enrich themselves, their families and their friends.

[…] But as long as the leadership’s investigations focus on economic sectors controlled by rival political factions, it will be hard to shake the impression that corruption probes are merely a useful tool to discredit political opponents, rather than a serious attempt to tackle the rottenness at the heart of the country’s economy. [Source]

[…] “For more than two decades there have been two reasons why top Chinese authorities launch “anti-corruption” drives, and in neither case is the goal to wipe out corruption,” he told DW.

The expert from the University of California, Riverside said that corruption charges are used, on the one hand, as a “public cover for bringing down political opponents.” On the other hand, he added, they are aimed at “making a show, to an increasingly Internet-savvy public, that ‘we top leaders share your indignation, and are on your side.'”

“To strike out against such big fish as Zhou Yongkang and Jiang Jiemin suggests that in this case reason one is more likely than reason two. It would be dangerous to go after such big targets simply for the purpose of making a show,” Link explained. [Source]

A Review & Outlook piece at The Wall Street Journal argues that this is not merely cliquish maneuvering but a sign of a real ideological rift within the Party:

Since a Party split led to the 1989 Tiananmen Square massacre, China’s leaders have been careful to rule by consensus and settle differences by compromise rather than purges or mass campaigns. This favored the advancement of gray organization men like Messrs. Jiang and Hu, while technocrats like former Premier Zhu Rongji were given a relatively free hand to direct policy pragmatically. The competition within the Party was mainly between networks of patronage rather than cliques loyal to a particular flavor of Marxism.

The Central Committee plenary meeting in November should bring more indications of whether the post-Deng order can be maintained. Ideology is making a comeback as the Chinese public grows restless with the post-1989 social contract of rising standards of living in return for not questioning the Party’s monopoly on power. Mr. Bo was among the first to try to capitalize on the thirst for political alternatives. He won’t be the last. [Source]

Zhou, who oversaw China’s immense security state, was like a Chinese Dick Cheney; the power behind the throne, said a Western academic familiar with the matter. He also said that former FBI director J. Edgar Hoover, a man known for his extensive surveillance network, “might have had” Zhou’s reach. Officially, Zhou was the least powerful of the nine-member Standing Committee, the elite subgroup within the Politburo. But when I spoke with this academic in 2010, Zhou was probably the third most powerful man in China, behind President Hu Jintao and Premier Wen Jiabao, exponentially more influential than Bo.

The 73-year-old Zhou reportedly liked to show his power by feats of physical strength. “When he’d go places for investigation, he’d do like 50 or 100 pushups” in front of others, said a Chinese academic who lives overseas and is familiar with elite politics. In August 2007, 2 months before he ascended to the Standing Committee, Zhou visited a police station in south China’s Yunnan province. He surprised onlookers by doing “ten sit-ups in one breath,” after which everyone “spontaneously burst into applause,” according to China News Service, a state-run news agency. [Source]