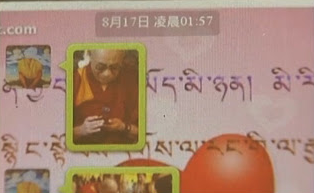 High Peaks Pure Earth translates an April blog post by Woeser on surveillance of Tibetan monks, through both remote monitoring of services like QQ and WeChat and physical inspection of cell phones at monasteries:

[…] According to reports, the inspection work group collects all phones in a monastery and spends four or five days checking them without the monks being able to see. Moreover, whenever the inspection teams are carrying out their work, they are accompanied with fully armed military police. Often they search one or two of the monks’ residences and turn them upside down; such situations are actually quite frequent since March 2008.

[…] In short, the reason why the country’s power is directed at certain groups of people in certain places by collecting their mobile phones, is for one to examine them and to threaten the people, but what is more dangerous is that perhaps, it is to install an application on each phone, through which information about the users can be collected, leading to personal information about the user being revealed without him or her being aware of it. Casting such a vast dragnet across an entire area equals to turning the mobile phone that everyone carries around with himself or herself into a self-monitoring policeman. [Source]

See more on surveillance in Tibet and across China via CDT. High Peaks’ translation comes amid debate over privacy in the West following leaks about NSA and GCHQ surveillance. In July, however, Woeser’s husband Wang Lixiong argued that “when it comes to domestic spying, the U.S. is no China.”