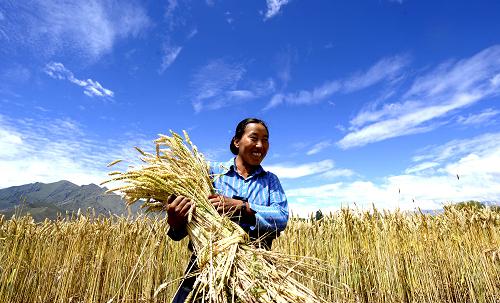 After president Xi Jinping told farmers in Hubei that the Chinese “must rely on ourselves for grain security,” The Economist questions the prevailing policy that the world’s second largest economy must meet 95% of its grain demand with domestic production:

In the early 1960s, even as tens of millions of Chinese starved in a brutal famine, Mao Zedong was reluctant to import grain. Now, though, China is deeply integrated into global commodity markets. It is not alone: Japan and South Korea both import 73% of the grain they consume. Saudi Arabia imports 87%. Yet official policy in China still calls for 95% of China’s grain demand to be met by domestic production.

To many economists, the very idea is nonsensical. Given global price disparities and China’s comparative advantages, they say, China should import more of its food rather than dedicate limited land and water resources to growing it all. Feng Lu of Peking University says earning enough foreign exchange through exports to import whatever grain you need could be described as self-sufficiency. In 1961, he reckons, China would have needed 25% of total export revenues to meet domestic grain shortfalls through imports. Today, that proportion is at most 2%. [Source]

Last month, China announced that it would continue import quotas on wheat in 2014 at the same level as this year. Bloomberg reported this week that wheat-growing areas of northern China may see a drier-than-normal this weekend:

Temperatures in central and eastern China may be mild during December, January and February, with some brief cold snaps occurring in northeastern areas, according to a seasonal outlook report for Asia from the State College, Pennsylvania-based forecaster. The main Chinese wheat-growing areas probably won’t see temperatures cold enough to damage crops that are dormant during winter months, said Dale Mohler, a senior meteorologist at AccuWeather.

“A dry winter alone wouldn’t be enough to cause serious problems as long as they get spring rains,” Mohler, who focuses on commodity forecasting, said in a telephone interview. “The crop could be in a little more stress going into the spring, so rains would have to start on time.” [Source]