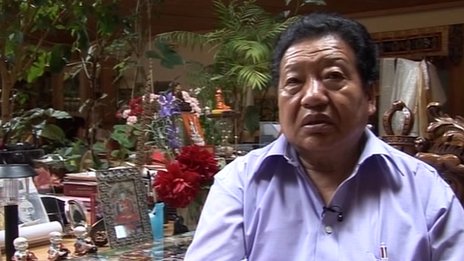 The BBC reports that Chinese police have confirmed that three Tibetan men confessed to stabbing to death the founder of the first Buddhist monastery in the UK, the Tibetan Monk Dr Choje Akong Rinpoche, in Chengdu in a dispute over money. The case is still under investigation:

A statement on the official website of Tibetan Buddhist leader the Karmapa Lama said he was “shocked” by the news and offered his condolences to his family members and everyone at the monastery.

“I hope that all of his visions and aspirations may continue to be fulfilled,” he added.

A statement posted by Lama Yeshe Rinpoche said: “To all dear friends of Samye Ling and Choje Akong Rinpoche, I am very, very sorry to inform you all that tragically, my brother Choje Akong Rinpoche, my nephew and one monk who was travelling with then, were all assassinated in Chengdu today.”[Source]

Update: The Abbot and Trust Chairman of the Samye Ling Monastery, Lama Yeshe Rinpoche, released an updated statement clarifying that he had misused the word “assassination” in the quote above to describe the killing of his brother:

Unfortunately I used the word “assassination” in respect of the killing of my brother Akong Rinpoche. English is not my first language and I did not appreciate that the word means killing with a religious or political motive. I never intended to imply that there was such a motive and I regret the misunderstanding that has been caused.

Mick Brown provides a fuller portrait of the life of the deceased founder and abbot of the Samye Ling Tibetan Buddhist Monastery in Scotland in The Telegraph:

Akong fled from Tibet into India in 1959, following the Chinese occupation of the country. But in recent years he had established unusually good relations with the Chinese government, and was able to travel in the country supervising schools and medical programmes that had been established by his charity The ROKPA Foundation. He was on a visit to these projects when he was killed.

Akong had played a key part in one of the most controversial episodes in Tibetan Buddhism in recent years In 1992, he led the search party that brought a seven-year-old boy Apo Gaga from his home in a nomad’s tent in Eastern Tibet to Tsurphu monastery, near Lhasa, where with the permission of the Chinese authorites, he was enthroned as the 17th Karmapa, Urgyen Trinley Dorje – the second most important figure after the Dalai Lama in the Tibetan Buddhist hierarchy.

In 2000, at the age of 14, the Karmapa escaped from Tibet into India, when it became apparent the Chinese would not allow him to receive his lineage teachings and had designs to use him as a political “puppet”.[Source]

The 17th Gyalwang Karmapa also posted a condolence message for Akong Tulku from New Delhi on his official website:

Akong Tulku has been my friend from the time I was seven. A social activist, he showed great kindness to Tibet by founding schools and hospitals, printing old texts, and helping many people. Thus I am shocked to hear that he along with two others has been taken from us so suddenly. I would like to offer my condolences to his family members, everyone at Samye Ling Monastery, the Rokpa Foundation, and all the persons involved in his projects in Tibet as well as to all of the students whose lives he touched. I hope that all of his visions and aspirations may continue to be fulfilled.[Source]

See the trailer for a London-based film currently in the making about the life of Akong Tulka called “Akong a Remarkable Life.”