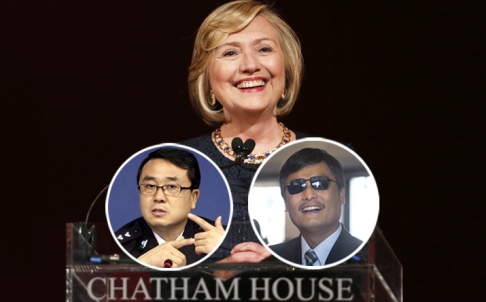 Speaking at Chatham House last week, former secretary of state Hillary Clinton talked about U.S. diplomacy towards China, and particularly its handling of the dramatic cases of Wang Lijun and Chen Guangcheng. Both men sought refuge in American diplomatic stations in China last year, Wang after incurring the anger of his superior Bo Xilai following the murder of Neil Heywood, and Chen after escaping from house arrest in Shandong. From Zhang Hong at South China Morning Post:

“When Bo Xilai’s right-hand man, the police chief, showed up in a consulate asking for asylum, he did not fit any of the categories for the United States giving him asylum,” Clinton said. “He had a record of corruption, of thuggishness, brutality. He was an enforcer for Bo Xilai.”

[…] Wang “kept saying that he wanted to get the truth to Beijing. He wanted the government in Beijing to know what was happening. So we said: ‘We can arrange that.’ So indeed that’s what we did. We were very discreet about it and did not try to embarrass anybody involved in it, but tried to handle it in a very professional manner, which I think we accomplished.”

[…] “I get called late one night about Chen,” Clinton said. “It was about a week before our annual Strategic and Economic Dialogue meeting, this time in Beijing. I was very well aware that this would be an issue in the relationship. But I also believed that this was an example of American values in practice. This was a man who, yes, deserved American support and attention and protection,” she said. [Source]

A leaked directory from the State Council Information Office instructed websites not to post or comment on the remarks.

Clinton described the two events as examples of an improvisational streak in Washington’s behavior. “I came to believe that the Chinese, for their own reasons and because of their own way of governing, believed that somewhere in Washington there is a master plan about what we intend to do to try to control their rise. […] They have never understood the jazz-like quality of American government and democracy.” Read more in the full transcript (PDF), or watch below: