At Last, ‘The Plum in the Golden Vase’ in English 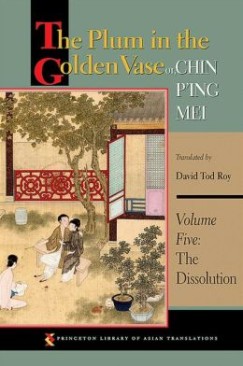 [… T]he Chin Ping Mei is a mean-spirited page-turner, built for cruel speed. The plot concerns Hsi-men Ch’ing, a corrupt merchant in a rural district who, through a series of sexual and political intrigues, develops and indulges stranger and stranger tastes until he dies of “sexual excess” at the age of 33. The book is most famous for being pornographic, and the word most often attached to it is notorious. But the sex, while it is what makes the book original, is by no means the most interesting part of the novel, at least to a contemporary reader. The Chin Ping Mei’s true subject is everything. It inhabits the local whorehouse as intimately as dinners with Imperial officials and is wonderfully fleshly in many ways, not just the erotic. The author is just as good writing about a man warming his hands at a brazier as he is at extreme sexual acts.

[…] I’ve been reading about Hsi-Men Ch’ing for years. His name has been Zhang Shugang and Jiang Jiemin and Bo Xilai. Just today it was revealed that one of the major causes of the condo boom in Beijing is the need to house so many mistresses [see here] — a fact that could have come straight from the Chin Ping Mei. The book is 400 years old, but its moment is right now. [Source]