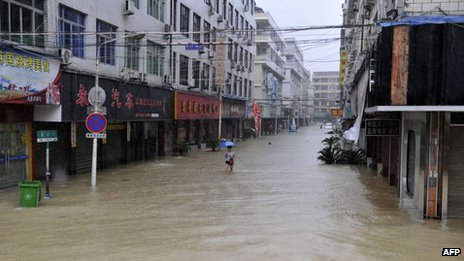 After Typhoon Fitow landed in southeastern China causing massive damage and forcing hundreds of thousands to evacuate their homes on Monday, Xinhua reports on the death count and destruction from the storm:

Ten people have been killed and five others have been left missing in Wenzhou city since Typhoon Fitow brought rainstorms to east China’s Zhejiang Province, local authorities announced on Wednesday.

[…] Typhoon Fitow, which made landfall in Fujian Province, just south of Zhejiang, early on Monday, has triggered heavy rain in the region, inundating roads and houses, and causing river breaches and power failures.

As of 11 a.m. on Wednesday, 254,746 households in Zhejiang Province had no power supply. About 10,000 workers are repairing electric facilities in the province.

The typhoon has affected 7 million people in 11 cities in Zhejiang, causing direct economic losses of 12.4 billion yuan (2 billion U.S.dollars)as of 10 p.m. on Monday, according to the provincial flood control and drought relief headquarters.

Weather is now reportedly calm in the regions hit hardest by the Pacific storm. For images and an early report on the storm’s havoc, see coverage from BBC. Fitow comes just after Typhoon Usagi devastated the eastern part of Guangdong province, killing 25 in late September.