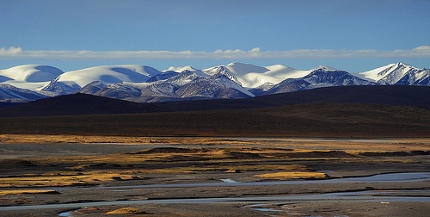 On their website, The Third Pole has posted an interview with Gabriel Lafitte, author of the book Spoiling Tibet: China and Resource Nationalism on the Roof of the World, in which the author and development consultant to the  Central Tibetan Administration discusses the implications of large-scale Chinese mining on the Tibetan Plateau. In the opening of the interview, Lafitte explains how traditional Tibetan culture provided environmental services to a landscape that millions in Asia rely on for fresh water:

The Third Pole: What’s so special about the Tibetan Plateau?

Gabriel Laffite:[…] Science works by reducing complexity to a few variables that can be controlled, observed, manipulated. Only after the experiments can complex reality be rebuilt.

The interconnectedness of all phenomena is not news to Tibetans, who, for thousands of years, sustainably managed a plateau the size of western Europe, with the light touch of a mobile civilisation. On a great plateau with no fences, wild and domestic herds mixed freely, with room for all, biodiversity conservation accomplished by doing nothing, beyond routine reminders by Buddhist lamas that hunting is bad karma. The Tibetans knew their land was rich in minerals, but mined sparingly, so as to not disturb the earth gods. They knew their many rivers continued, far past the high plateau, in all directions watering abundant populations downriver.

In today’s language, they provided environmental services, by doing nothing, other than moving on with their herds to avoid overgrazing any one spot. They knew the climate was highly unpredictable, with sudden snowstorms and hailstorms possible in summer, blizzards and intense cold snaps at just the time the yaks and sheep are moving up to their alpine meadows in spring, or down again to winter pasture in autumn. Adaptability, a capacity to live off uncertainty, flexibility of pasture management and risk management were among the skills that made the Tibetan Plateau humanly habitable. At the extraordinary altitude of the planet’s great island in the sky, Tibetans could watch the jet stream divert southwards round the plateau in winter and around the northern edges of the plateau in summer. Tibetans knew, from daily experience, what science has come to call the teleconnections linking all climate systems into a planetary circulation.

But why put this intimate, embodied knowledge of energy flows, atmospheric circulation, and the water cycle in the past tense? The knowledge of interdependence is still there, even if the plateau is compulsorily fenced, and the wild herds of antelope endangered. The knowledge of grasses, seasons, winds and risks is still in use, in the remaining areas of the plateau where grazing is still permitted, and mobility can still be practiced. The purity of rivers and lakes is still protected by customs that warn against angering the capricious water spirits. […] [Source]

See also a review of Lafitte’s book (via CDT) arguing that the pollution from Chinese mining operations in Tibet are in effect poisoning China, or CDT coverage of Lafitte’s dismissal of Beijing’s explanation of a deadly landslide at a Tibetan mine.