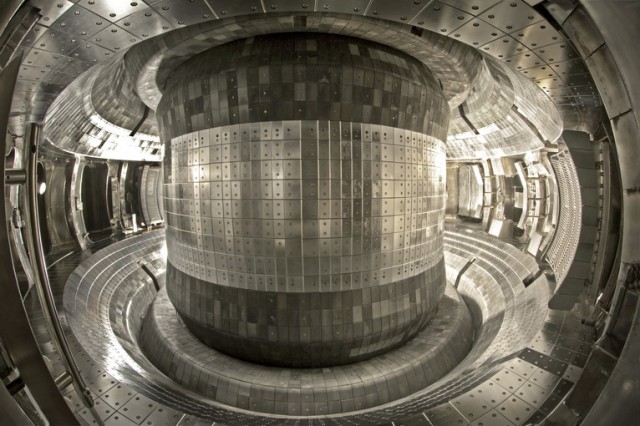 When plasma is magnetically confined and heated beyond a certain limit, it transitions to a high-confinement mode, or H-mode. In this mode, the plasma itself spontaneously generates an “edge” that partly prevents particles from escaping, and it throttles turbulence in the hot material. This more than doubles the time plasma can be confined. The present study achieved more than 30 seconds of a sustained H-mode pulse, an improvement of 10 to 20 times beyond anything achieved at other reactors. Thirty seconds may not sound like much until you realize this is plasma at more than 100 million degrees, more than five times the core temperature of the Sun.

[…] EAST can be thought of as a pathfinder for the larger International Thermonuclear Experimental Reactor (ITER), slated to begin operation in 2020 with full fusion power tests in 2028. However, thanks largely to budgetary cuts across science, the United States has withdrawn its financial contribution to ITER, which could delay the start further. [Source]

For a brief explanation of how fusion works, see the UK’s Culham Centre for Fusion Energy. Culham director Steven Cowley talked to chinadialogue’s Olivia Boyd in February about China’s growing importance in fusion research, and fusion’s potential importance to China (via Sam Geall):

“It’s a stark thing for China,” says Cowley. “There aren’t really any options to power an economy of that size into the second half of the century, except burning vast quantities of fossil fuels, which we all know will not be good for the world.”

Conventional nuclear power is limited by the fact the world’s uranium stocks may run out in a couple of hundred years. Fusion on the other hand gets its fuels, deuterium and lithium, from seawater – not only in plentiful supply but easily accessed, a definite bonus for an increasingly energy-insecure China. Moreover, fusion produces no significant waste. Against the background of a global struggle to dispose of toxic waste piles, this is a weighty advantage.

“For an economy the size of China’s, especially the size it will be in three decades, fusion is really the only thing I think you can slip in without producing a long-term legacy of what you’ve done, whether that’s massive CO2 build up, or a lot of nuclear waste to store,” says Cowley.

[…] “China has lots of cash and lots of educated people and I don’t think they’re going to leave any stone unturned in the search for a long-term stable fuel supply,” says Cowley. “Because otherwise, Chinese growth will come to a shuddering halt, and similarly everywhere else.” [Source]