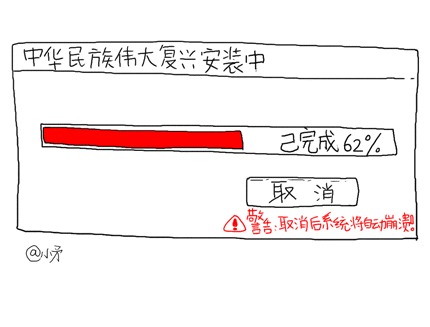 “I would like to ask, how was this little number calculated?” asked one user of Sina Corp.’s Weibo microblogging service, putting the question more politely than most.

[…] Also unclear is what it will mean for China to have achieved 100% rejuvenation – a question Mr. Xi himself has so far not been able to answer with much precision. Does it mean a return to the prestige China enjoyed at the height of its last dynasty, the Qing, when the country was ruled by Manchus and encompassed vastly more territory? Or is a better standard perhaps the Tang, when Han Chinese ruled an empire that was the center of global commerce and innovation?

Mr. Yang insists that rejuvenation, despite its connotations, doesn’t imply a return to some past glory. Instead, he writes, it means “a ‘recovering’ of a completely new” concept of China that includes a fully developed, sustainable economy and the ability to “contribute greatly to world peace and development.” [Source]

Chin notes that the rate of rejuvenation has slowed since a boom between 2005 and 2010, from an average of 3.34% per annum then to just 1.3% from 2011-12. At this reduced rate, full rejuvenation will not be attained until late 2038. The current pace still exceeds the historical average of a suspiciously neat 1% per year identified by an Anhui government advisor, however. From Jamil Anderlini at The Financial Times:

Mr Zhou worked out the number of days between 1949 and 2049 – 100 years from the founding of the People’s Republic of China – then calculated the proportion of days that had passed by the start of July 2012, when Mr Yang first published his rejuvenation index for the year 2010.

The result was 62.74 per cent of the 100 years had passed by then – exactly the same level of rejuvenation that Mr Yang said had been achieved in China by the end of 2010. [Source]

But one weibo poster suggested last year that Yang had miscalculated, and that the national rejuvenation had fatally stalled at 89.64%.