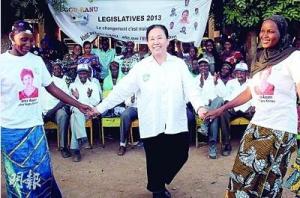 Since 1982, Chinese-born Yu Hongwei has been living in Mali, where she is a naturalized citizen known by the local name Astan Coulibaly. Women of China reports that Coulibaly has become the first ethnic Chinese to compete for a seat in the West African nation’s National Assembly:

Yu Hongwei, a 54-year-old woman who was born in east China’s Shanghai, is set to compete for a seat in Mali’s national assembly, a move which has been hailed by the local media as a sign of racial harmony in the west African nation.

Yu, the first Chinese person to participate in Mali’s government and political affairs, is among the more than 1,000 candidates vying for 147 seats in the parliamentary election which is to be held on November 24, 2013.

“At a time when other foreign nations are throwing out foreigners we in Mali welcome a successful example of integration,” said former president of the African Solidarity for Democracy and Independence party Nouhoum Keita.

[…]Yu’s campaign focuses on helping people in Segou and improving the lives of women, children and young people without jobs. [Source]

The South China Morning Post has more on Yu/Coulibaly’s background, and notes that some voters see potential for economic growth in her ties to China:

On the campaign trail in Dioro, 60 kilometres from Segou, Coulibaly receives an enthusiastic welcome, and it is perhaps unsurprising that many supporters see her as means of access to much-needed Chinese aid and investment.

“We’ll vote for you so that the Chinese make the journey here,” one woman cries.

Coulibaly doesn’t rule out tapping her contacts to seek aid from the small but burgeoning Chinese business community in Mali. [Source]