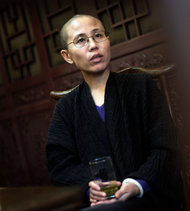 Austin Ramzy reports for The New York Times on a newly emerged personal letter by Liu Xia, who has been under house arrest since her imprisoned husband Liu Xiaobo won the 2010 Nobel Peace Prize. From Perry Link’s translation of the letter:

I have always loved reading, and do much of it. Most of the books in our home are ones I personally purchased and brought here, and most of the hours in my life are spent in reading them. I describe myself as having grown up “feeding on books.” My reading has no specific goal; for me it’s rather like breathing — I have to do it in order to live. When I find books that I love, I feel the author is writing for me alone, and feel a private joy.

[…] I chose this life myself, so need to see it through to the end.

In 1996, at the Holocaust museum in Washington, D.C., I bought a postcard that showed a pile of shoes of Jewish people. Since then, innumerable Jewish people have been standing in my memory. I think that some day we, too, will have a memorial building to remember those people who are slipping out of the memories of Chinese today. We will. For sure. [Source]

According to reports earlier this month, Liu Xiaobo is to appeal the 11-year sentence of which he has now served almost half.