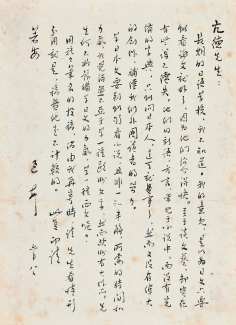 The South China Morning Post reports that a letter by revered Chinese writer and intellectual Lu Xun sold for 6.56 million yuan (more than US $1 million) at an auction in Beijing on Monday:

The letter, containing just 220 Chinese characters, came under the media spotlight due to its relatively small number of characters commanding such a sky-high price. Each of the characters in the letter has been calculated as being worth almost 30,000 yuan.

The letter addressing to Tao Kangde, a prominent publisher and editor of Lu’s time, was written in 1934 responding to his inquiry about Japanese language studies, according to China Guardian Auctions, the company that held the auction.

The short handwritten letter by the late Lu Xun was sold at an auction for 6.56 million yuan (HK$8.3 million) on Monday. In the letter, Lu Xun, who had travelled to and studied in Japan for seven years in the 1900s, suggested to Tao that studying Japanese to the level of being able to read a thesis was sufficient. [Source]

Coverage from the New York Times provides background on Lu Xun, notes reasonability in the price of this rare artifact, and includes a full English translation of the letter:

“It was a reasonable price,” Song Hao, a senior manager in the rare books department of China Guardian, said in a telephone interview. The letter had been acquired — with difficulty, she said — from a private collector in China whom she declined to name. The auction house sold another item written by Lu Xun’s last spring, also fetching over 6 million renminbi, she said, but artifacts related to Lu Xun are rare.

“There is very little of Lu Xun’s circulating in the market,” said Ms. Song, explaining the price.

And its provenance is solid. “Add on to that the fact that this letter is in his published collections, so it is very reliable,” she said. “And its contents are good. His advice on learning Japanese is of use today for people learning foreign languages.” [Source]