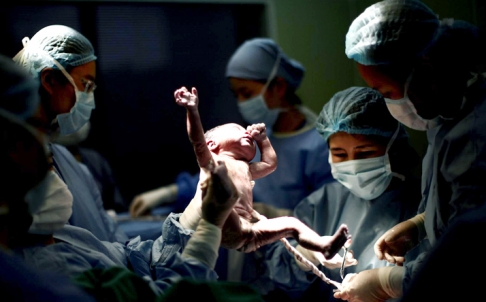 At South China Morning Post, Zhuang Pinghui reports that a growing number of pregnant women in China are choosing to undergo caesarean sections instead of having natural deliveries:

The number of mainland women like Wu who opt for a caesarean section instead of natural delivery has risen from about 5 per cent three decades ago to 46 per cent in 2010 – the highest rate globally. The World Health Organisation recommends the rate should not be higher than 10 per cent to 15 per cent.

A 2011 report in the WHO Bulletin found the proportion of caesarean births on the mainland rose dramatically within a decade, becoming common not only among the wealthy and well-educated, but across the socio-economic spectrum, including the poor, the uneducated and the rural population.

Many factors have contributed to the rise, said Zhang Xiaohong, a professor of obstetrics at Peking University People’s Hospital. Natural delivery is believed by some to be extremely painful and presents an avoidable health risk.

[…] Meanwhile, the shortage of midwives on the mainland was another factor behind the declining number of natural births, Zhang said. [Source]

See also how some wealthy Chinese are paying U.S. surrogates to deliver their babies abroad.

What’s on Weibo: China and the End of Down Syndrome