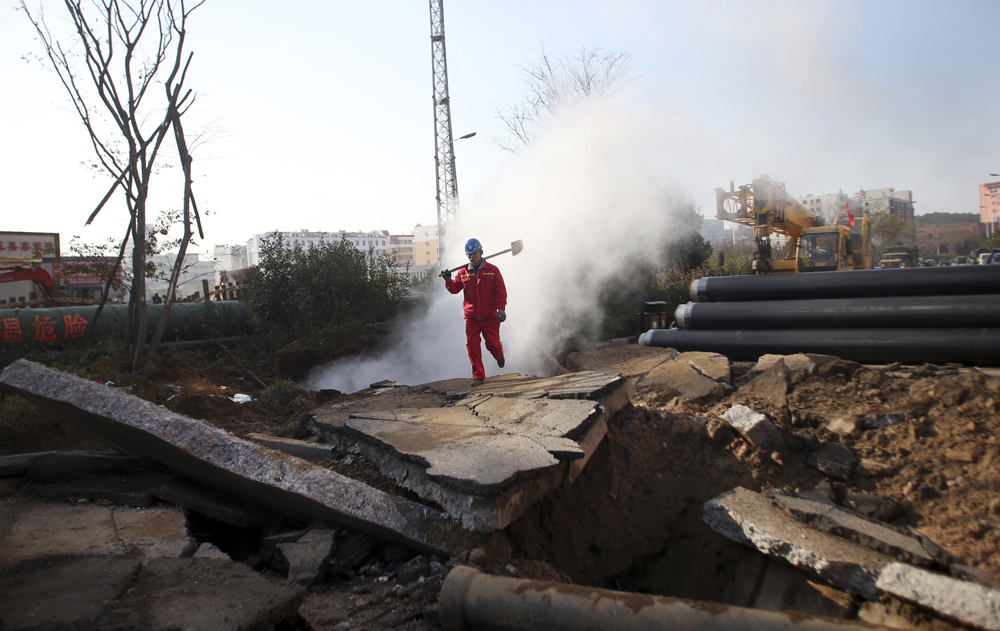 In the wake of the Sinopec oil pipeline that exploded on the outskirts of Qingdao last Friday, the death toll has risen to 55 and nine people have been detained. BBC reports:

The blasts in the eastern city of Qingdao took place on Friday, after a leaking oil pipeline owned by oil refiner Sinopec caught fire.

Seven of those arrested were Sinopec employees, while two came from the city’s economic and technological development zone, Xinhua reported.

At least seven of those detained are employees of the state-owned China Petroleum & Chemical Corporation, also known as Sinopec Limited. From Bloomberg Businessweek:

The personnel from Sinopec, as the refiner is known, and two from an economic development zone in China’s eastern Qingdao city were detained by police, the city’s Huangdao district government said yesterday on its official microblog.

The explosion and crude oil leak on Nov. 22, the deadliest since at least 2005, adds to a growing toll from industrial accidents that’s building pressure for better safety standards and management. It shines a spotlight on management of state-owned energy companies after the government pledged this month to allow more private investment as part of the biggest reforms since the 1990s.

“Someone has to be accountable for what has happened,” said Laban Yu, a Hong Kong-based analyst at Jefferies Group LLC. “Sinopec executives can only escape with minor punishment if investigation concludes that local government was at least equally responsible for the accident.” [Source]

Xi Jinping traveled to Qingdao after the accident, where he called for increased scrutiny of the pipeline industry, and pledged “zero-tolerance” for safety violations. From the Wall Street Journal:

The official Xinhua news agency quoted the Chinese president as saying on Sunday that safety must be improved in the pipeline industry, and he called for stronger inspections and punishments for violations. Mr. Xi added that pipeline operators should continue to carry out inspections and enforce a “zero-tolerance” policy for violations.

There should also be surprise inspections, he said.

Friday’s explosion came hours after a leak in the pipeline was reported. At the New York Times, Austin Ramzy rounds up Chinese media reports asking if better evacuation procedures could have reduced the death toll:

“In the seven hours from the leak to the explosion, did residents know a leak had occurred?” The Beijing Youth Daily, an official newspaper, asked Sunday. “In a situation of awareness of the hidden danger, were measures adopted to evacuate the masses? Were related safety measures promptly put in place?”

The Beijing News, an aggressive commercial newspaper, suggested that the lack of sufficient warning might have contributed to the death toll.

“According to already public information, from 3 a.m. when the leak happened to 10:30 a.m., in the space of more than seven hours, the company and even the local government it seems were only busy with handling the leak,” the paper said in a commentary Monday. “No warning to evacuate residents has been seen, and from news reports, many residents regarded this as a sudden disaster with no chance to prepare. This perhaps is a reason for the large toll of dead and injured.” [Source]

A report from the Wall Street Journal looks at how poor planning in the midst of hasty urbanization could be to blame for last week’s disaster:

[State Administration of Work Safety director] Yang [Dongliang] said the problems included how the pipeline and the city’s sewage and underground cable systems had become intertwined. But he also cited “negligence of duty of pipeline supervision and unprofessional handling of oil leakage before the blasts.”

[…] Qingdao’s rapid urbanization and fast-paced industrialization illustrates the challenges that China’s leaders face in planning for economic growth. Qingdao’s population jumped to 8.5 million in 2010 from 6.3 million in 1986.

In 2011, Qingdao completed a 17-mile bridge across Jiaozhou Bay to alleviate traffic that choked a highway that curved around the bay. That structure connects its downtown with the district of Huangdao, where Friday’s explosions occurred, and accelerated Huangdao’s development.

“I wonder why so many factories and companies have been built in the area, and why people are being directly exposed to pollution and explosions,” said a Huangdao resident calling herself Xiao Rou on her microblog. “Why doesn’t the government take measures?…I hope the government can give us a safe home.” [Source]

Also see a collection of images from the aftermath of the explosion, compiled by The Atlantic.