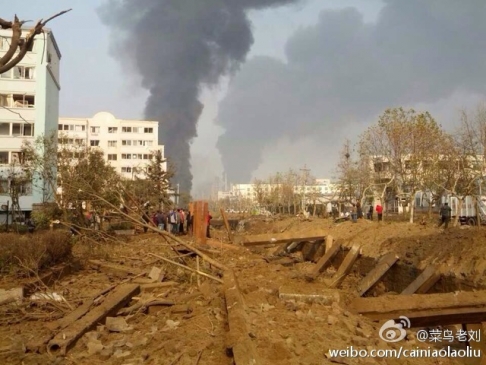 An explosion outside a petrochemical plant on the outskirts of Qingdao has killed three people and injured 48. From the South China Morning Post:

Three people have been confirmed dead, the local newspaper Bandao Dushibao reported in a weibo post. Two people died within the premises of the chemical [plant], the newspaper said. Photos show ruptured streets and destroyed vehicles.

Around 3am an oil pipeline ruptured causing an oil spill, the Qingdao municipal government said in a weibo post around noon. The repairs led to a fire and caused the explosion, according to the weibo post. Two fires were extinguished by 1pm. [Source]

Pics: A leak in an oil pipe that belongs to Sinopec triggered a fire near Qingdao city on Friday. pic.twitter.com/449Og2BED7

Update: On Friday, the death toll was raised to 35, according to Xinhua News:

At least 35 people died and 166 were injured in an oil pipeline blast Friday in Qingdao. http://t.co/9vNPM8DXmC pic.twitter.com/AAbnMS2v8F

BBC has more details on the explosion:

The leaking pipeline was spotted early on Friday, and the explosion happened several hours later, the Qingdao government said on its official microblog.

[…] A man quoted by Xinhua said he had only seen something similar to the blast “in a disaster film”.

The authorities have ruled out terrorism but say the incident remains under investigation.

[…] Because the scene of Friday morning’s explosion is close to the coast, barriers have been erected to stop oil leaking into the sea, reports said. [Source]