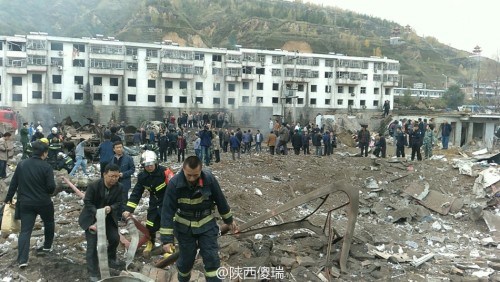 At least 14 people were killed and 150 injured in an explosion in Yulin, Shaanxi Province, according to a report by Chris Buckley at The New York Times:

The explosion occurred in the afternoon in Xinmin, a town in Fugu County, Shaanxi Province, and by early Tuesday rescuers had counted 147 wounded, 113 of whom had been hospitalized, according to Xinhua, the main state news agency. Eleven of the wounded were in intensive care.

By Tuesday, rescuers had finished searching for anyone buried under wreckage after pulling six people out overnight.

An investigation into the cause of the blast suggested that it was another example of a widespread hazard in China: dangerous substances stored improperly and too close to homes.

[…] The police said that the explosion apparently originated in a steel hut that had been rented out and that they had detained the owner of the hut and were searching for the renters. An earlier report said the hut appeared to have been used by a construction crew. [Source]

For Medium, China Media Project’s David Bandurski writes about the blackout on the story in China’s traditional media:

The CNWest WeChat post drew thousands of comments, adding to the rumour and speculation gaining momentum online. Photos and video, shared through internet portal sites like Netease and Sina as well as on Weibo and WeChat, quickly made the rounds.

But almost as quickly, the story stopped in its tracks.

An official news release from Xinhua News Agency, the foundation of Hong Kong media reports yesterday and international media reports today, came at around 5 p.m. And once the Xinhua version was out, the story started progressively disappearing from the internet inside China, buried and marginalized.

[…] The story was missing almost entirely from today’s newspapers in China. Searching the WiseNews database, covering more than 300 mainland newspapers, I found just six mentions of “Yulin + explosion,” and just one front page report in the entire country. [Source]

Accidents at industrial plants and chemical storage facilities have occurred at an increasing rate in recent years as rapid economic growth has been accompanied by lax safety standards. In August 2015, an explosion at a chemical plant in Tianjin killed nearly 150 people. Government censors routinely limit reporting on such incidents, though photos and other information often get shared widely online. After the Tianjin explosion, Chinese journalist He Xiaoxin traveled to the scene and wrote up her observations in a moving post that was soon deleted.