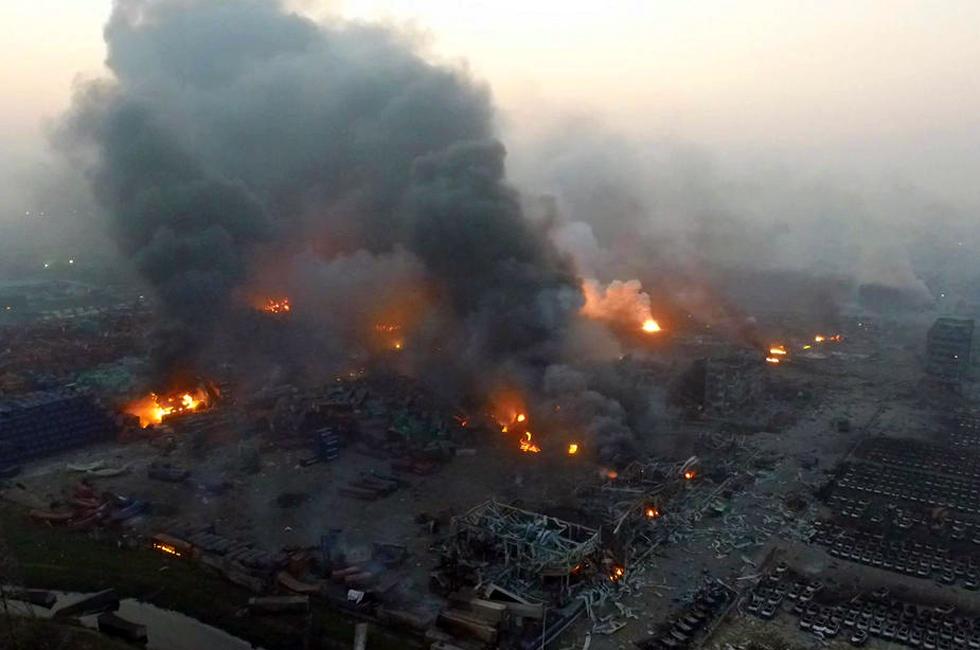 A deadly steam pipe explosion at a coal-fired power plant in Dangyang, Hubei killed at least 21 people and injured five on Thursday, Edward Wong at The New York Times report:

The deaths and injuries occurred when a high-pressure steam pipe exploded at a plant in the city of Dangyang in Hubei Province, according to a news website run by the provincial government.

The plant is owned by the Madian Gangue Power Generation Company, the website said. The company generates thermal power and sells slag, ash and petroleum products.

[…] On Thursday night, Xinhua, the state news agency, said an initial investigation by the city found that the steam pipe had burst and started leaking during a debugging process for the power plant, which is still under construction.

The plant uses coal gangue, also known as low-calorific coal, which is waste product from the mining and processing of coal. [Source]

The injured were being treated at hospital. Three of them suffered serious injuries, the report said.

Rescuers were still searching the site for victims.

The power company was founded in 2002 and its main businesses include power generation, sale of slag and ash, as well as petroleum products. [Source]

Thursday’s accident comes a day before the one-year anniversary of the Tianjin chemical warehouse explosion that killed at least 145 people last August. Although authorities have vowed to improve workplace safety in high-risk industries, Reuters’ Michael Martina writes that accidents remain “relatively common at industrial plants in China, and anger over lax standards is growing after three decades of swift economic growth marred by incidents from mining disasters to factory fires.” A chemical explosion in the Shandong city of Zibo and a blast in Dongying all occurred on the heels of the Tianjin accident.

China Labour Bulletin looks at the various disaster prevention measures implemented by local authorities in the wake of the Tianjin incident and the government’s effort to “divert the public’s gaze away from past disasters” in the run-up to the anniversary:

The Tianjin government issued a notice on 20 July calling on local officials to intensify their safety inspection work during the summer, “stay vigilant and take all measures possible to prevent major workplace accidents,” it said. Of particular importance, the notice said, was the control of dangerous chemicals such as hydrogen sulphide and ammonia – both of which had been stored at the warehouse prior to the explosion. A few days later, the local government in the New Binhai District, where the blast occurred, conducted a training course on work safety and disaster management for the combustible gas industry. And on the national level, the State Administration of Work Safety published new regulations on 3 June requiring companies to devise detailed contingency plans for workplace accidents.

[…] According to the official narrative, everything anyone needs to know about the explosion was contained in the State Council’s investigative report on the disaster, issued on 5 February, which concluded that the explosion had been caused by the ignition of dangerous chemicals stored at a warehouse illegally operated by Ruihai International Logistics Co. Ltd. The report identified 123 people, primarily local government officials and company executives, who were deemed responsible for the disaster which caused nearly seven billion yuan in economic losses.

The State Council report was designed to be the final word on the subject, and indeed there has been very little follow-up in the official Chinese media since then, and especially now that the Olympic Games are dominating the media agenda. The Southern Weekend did revisit the scene of the explosion for the one year anniversary in late July but its report (天津港心事“812” 特别重大火灾爆炸事故周年回访) was quickly removed from the newspaper’s website. [Source]

Twelve months on and little has changed for those who suffered losses as a result of the Tianjin explosions. The area remains largely inaccessible and uninhabited, leaving local businesses suffering with little hope of recovery. From AFP:

In the aftermath, officials pledged to convert the blast site to a park and renovate the area, part of Tianjin’s free trade zone that Chinese officials were promoting in Europe last month.

But a year later the blast site is still inaccessible, with a temporary blue metal wall ringing the perimeter.

Patrolling police prevented journalists getting a closer look, with a SWAT car parked on a highway overlooking the area to discourage anyone from stopping.

A brand new school next to the site sat empty and businesses were dark and locked, occasional groups of migrant workers the only signs of civilian life on the streets.

[…] “Since the explosion business has dropped significantly,” said Xuan, a manager at a firm in the same complex as Qin, who would only give his surname. “Chemical companies like ours have been affected especially hard, and volumes are down at the port.” [Source]

Many questions remain unanswered for the families and friends of firefighters killed in the deadly blasts, Li Jing at South China Morning Post reports:

The fire is out but questions remain over just how prepared the emergency crews were to tackle such a disaster and whether procedural errors worsened the toll.

Those questions haunt Zhang Zhao, the mother of Zheng Guangliang, who died battling the inferno less than two months after joining the port’s fire brigade as a contractor trainee fireman.

Zhang Zhao still cannot understand why her son had to attend the fire when he still had more than a month to go in his training.

[…] The past year has been difficult for Zhang Zhao and her husband: they closed their village restaurant and moved to a rented home in a township to avoid attention.

As the one-year anniversary approached, Zhang hoped to visit the blast site – for the first time – and hoped the authorities would organise a public memorial to the firemen who were killed there.

BBC’s John Sudworth reports that some victims’ families are speaking out against government attempts to mute commemorations leading up to the anniversary. Also see Reuters TV for footage of the Tianjin blast site one year on.