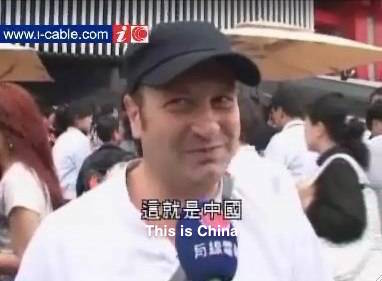 At least 114 people died in last week’s explosions in a warehouse in the Binhai area of Tianjin, where over 700 tons of sodium cyanide were stored. Hundreds of people have been displaced from homes built dangerously close to the warehouse, and have been petitioning the government for compensation. The Guardian’s Tom Phillips reports:

Dozens of protestors gathered outside a Tianjin hotel where media briefings are being held on Monday to demand compensation for their wrecked homes.

[…] The South China Morning Post said protesters carried banners reading: “We want the truth!” and “We love the party and the government, please buy back our apartments”.

[…] “The fact that the authorities allow such dangerous warehouses to be built near residential blocks shows that they care about only their own interests rather than the wellbeing of the people,” the Chinese activist said. “They are indifferent to people’s lives and their most basic human rights as long as it suits their own interests.”

“It’s not just the migrant workers’ lives that are worthless to them,” she added. “They don’t care about the lives of the middle class families either.” [Source]

To Weibo user Yuanliuqingnian (@淵流青年), these Tianjiners are learning the hard way that being part of the middle class doesn’t guarantee a safety net, as it would in a “normal country.” CDT has translated his short essay, which is still available on Weibo:

When disaster strikes, people have all sorts of things to say. Every kind of suggestion, from lighting candles to jeering at the “mushroom festival,” spreads left and right. I mean, before I could run and get a safety guide from the U.S. or Europe and see if there’s anything to translate about protecting yourself. But this thing, the pop science site guokr.com has that covered, so I won’t waste my time.

I think the difference between the current incident and previous factory explosions is that this one has blown apart the “normal country delusion” of the Chinese middle class.

Obviously, if you live in a nice house in Binhai with a BMW and a little dog, in your free time you twiddle your fancy worry beads, or else you go for a run and get your exercise in. You maintain a noble silence on any public incident you’re aware of. On the surface, you look no different from a middle class person in a normal country.

But this is a delusion. One explosion later, and the homeowners in Qihang Jiayuan and Harbor City discovered they’re the same as those petitioners they look down on, making the same moves: kneeling and unfurling banners, going before government officials and saying “we believe in the Party, we believe in the country.” This method has been used by countless petitioners—people from the counties who make five- or six-hundred yuan a month and receive chemical fertilizer subsidies. The homeowners realize, much to their embarrassment, that after an accident there’s really #nodifference between us and them.

In your country, if you wait patiently and obey government plans, you’ll end up with a 6,000 yuan rent subsidy. You get angry, you’ll burst with pent-up fury. What’s this worth? Is it enough for two months’ rent? Will I be able to live there afterwards? Is the area around it polluted? Who’s responsible? Who approved the construction of the warehouse? So you open your banner and cautiously try to make a stink about it and attract media attention. A government official promises to get in touch, then turns around and says “it’s all media hype.” You hope to get a scrap of favor from the government.

But, naturally, the Ministry of Truth and wire services have shut out [the media], and homeowners have received notices that they aren’t allowed to make banners. For once the pro-government folks have been rather considerate online, holding back on criticism of petitioners—but for the most part they’re just like the homeowners were before, maintaining a noble silence. And so the situation rapidly enters into the orbit of stability maintenance. I bet we won’t hear too many follow-up stories. Now that the government has pulled you into its most familiar tricks, it wouldn’t be strange at all if they drew on their rich experiences to defeat you.

What I’m trying to say in all these words can be summed up by this one image:

Now you know why I’m not surprised. [Chinese]