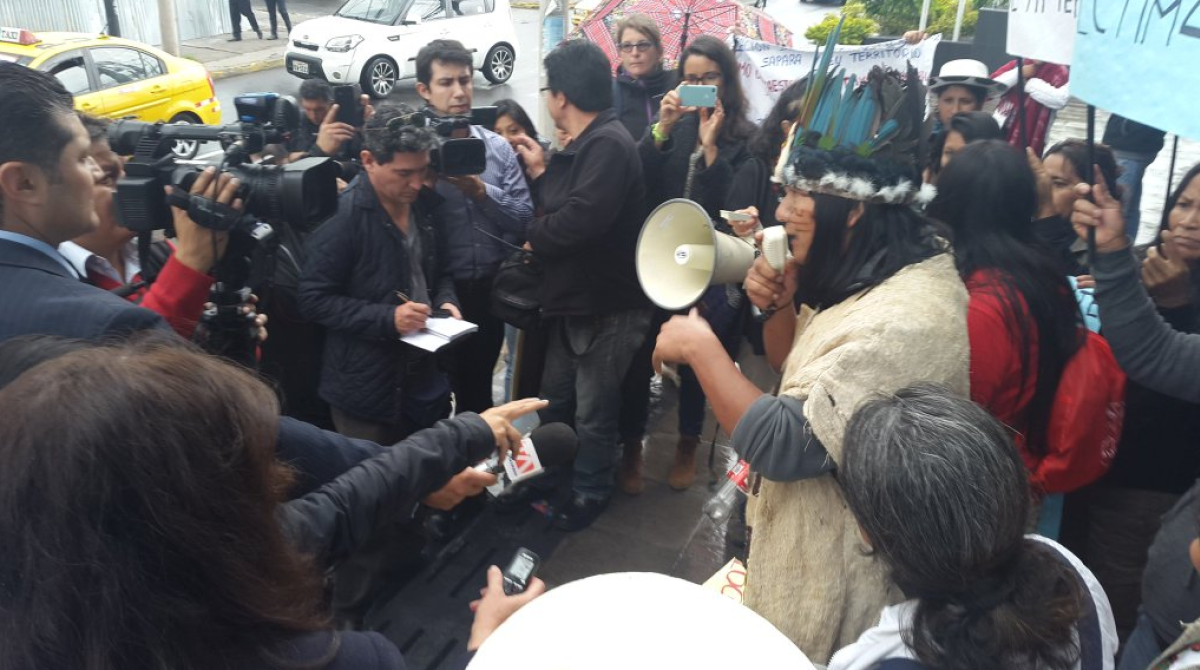 In recent years, as Beijing has been expanding economic ties with Latin America, engagement with Ecuador has been viewed with a mixture of hope and unease—while an inflow of Chinese FDI has been welcomed, environmental risks and labor discord have been noted to come along with it. Last month, Chinese petroleum consortium Andes Petroleum Ecuador—set up by state-owned China National Petroleum Corporation (CNPC) and China Petrochemical Corporation (SINOPEC)—signed two contracts with the Ecuadorian government guaranteeing oil exploration rights in a remote section of the Amazon rainforest. On January 27, China Daily reported on the deal, emphasizing the hopeful side:

The contracts with Andes Petroleum marked the start of oil exploration in Ecuador’ssoutheastern region and showed foreign investors’ trust in the Ecuadorian government,Ecuadoran Minister of Hydrocarbons Carlos Pareja said on Tuesday.

“It sends a message that our country is building up confidence and that companies want tocome and invest here despite the low international oil prices,” said Pareja.

[…] Zhao Xinjun, president of Andes Petroleum Ecuador, said the consortium has invested around $3.5 billion in the South American country to date, with cutting-edge technologies andfull respect for the country’s environmental regulations.

With oil as its main export, Ecuador currently produces around 540,000 barrels of oil per day. [Source]

Just prior to the oil deal, Ecuador signed a $970 million credit line with China’s state-owned Industrial and Commercial Bank of China (ICBC), which Ecuador’s finance minister announced as “part of a broader financial deal between Quito and Beijing last year.” Reuters (linked above) notes that China has been Ecuador’s largest financier since 2009.

At the Los Angeles Times, Jonathan Kaiman reports on mounting concern that this deal could threaten not only the region’s endangered biodiversity, but also its cultural diversity:

“That’s essentially the only Amazon in Ecuador that hasn’t been devastated by oil operations,” said Adam Zuckerman, environmental and human rights campaigner at the Oakland-based nonprofit Amazon Watch.

[…] “The whole northern Amazon has the legacy of Texaco, now owned by Chevron. Andes Petroleum, which is operating in the south, already operated in the north — and because of a legacy of contamination, and quite honestly, ethnocide in the north, the southern population sees this and says, ‘We don’t want this.’”

The oil blocks overlap with the traditional home of the Sápara, an indigenous group with only 300 members, according to Amazon Watch. The United Nations Educational, Scientific and Cultural Organization [UNESCO] declared the group an Intangible Cultural Heritage of Humanity in 2001 for their small numbers and unique, but disappearing language.

The blocks also border Yasuní National Park, a 3,800-square-mile area of jungle which is home to two indigenous tribes, the nomadic Tagaeri and the Taromenane, who have no contact with the outside world. Amazon Watch said the project may exacerbate “their vulnerability as oil drilling and infrastructure expands north, east, south and west of them.”

[…] The Ecuadorian constitution requires that the government undergo “free, prior, and informed consultation” with local groups before pushing through sensitive environmental projects. Yet indigenous groups say that the national government has divided and manipulated local communities to fulfill the consultation conditions, and has violently cracked down on opposition to potentially lucrative deals. [Source]

Members of the Sápara have long been protesting the proposal, and now that the deal has passed they vow to continue their action. At Fusion, Manuel Rueda reports on spirited campaigning by leaders of the dwindling Sápara Nation (called by their former name Zapara in the report), and compares the endangered tribe’s anxiety to the Ecuadorian government’s official line:

“We don’t want oil drilling in our lands,” said Ushigua, one of the most well-known leaders of Ecuador’s tiny Zapara tribe. “Our culture is at risk of disappearing; so is our language and our way of relating to the rainforest.”

The tribe, whose population numbers between 350 and 500, has vowed to take the case to international court because they fear that drilling will pollute the jungle and erode what’s left of their traditional way of life. They are the latest group threatened by Ecuador’s expanding oil frontier.

“If they put an oil well in our land, it would be like they are destroying our laboratory, our knowledge,” Ushigua, the president of the Zapara Nation, told me after his protest in Quito.

[…] Rafael Poveda, Ecuador’s minister for strategic sectors, promises that oil projects on Zapara land will be good for indigenous people because revenues will be used to finance local schools, roads and hospitals. Drilling doesn’t threaten indigenous cultures as long as oil companies are forced to comply with strict environmental rules, the government insists.

[…] The Zapara, meanwhile, say the central government’s financial issues are not their problem.

[…] “We will fight oil until our last breath,” Ushigua told me. “Our spirit needs a healthy environment.” […] [Source]