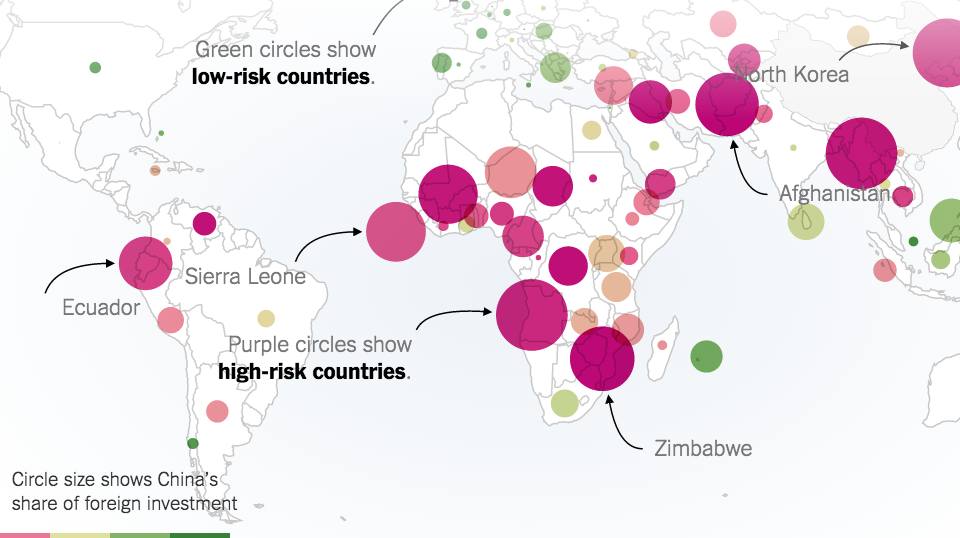 At The New York Times, Clifford Krauss and Keith Bradsher look at how China’s global engagement is changing as the nation continues to gain economic clout. The feature uses increasing economic interaction with Ecuador as a case study to show how Beijing is simultaneously shoring up resources and challenging the Western-dominated paradigm of global finance with a willingness to offer loans to autocratic and economically embattled countries with few environmental and political stipulations:

[…] While China has been important to the world economy for decades, the country is now wielding its financial heft with the confidence and purpose of a global superpower. With the center of financial gravity shifting, China is aggressively asserting its economic clout to win diplomatic allies, invest its vast wealth, promote its currency and secure much-needed natural resources.

[…] With its elevated status, China is forcing countries to play by its financial rules, which can be onerous. Many developing countries, in exchange for loans, pay steep interest rates and give up the rights to their natural resources for years. China has a lock on close to 90 percent of Ecuador’s oil exports, which mostly goes to paying off its loans.

[…] China also has a shaky record when it comes to worker safety, environmental standards and corporate governance. While China’s surging investments have created jobs in many countries, development experts worry that Beijing is exporting its worst practices. [Source]

The Times’ feature continues to zoom in on China’s economic engagement with Ecuador, looking at how the nation has moved towards China under the rule of popular current president (and longtime critic of Washington) Rafael Correa—describing environmentally risky projects, less than harmonious relations between local and Chinese construction workers, resource deals that heavily favor Beijing, and a mixture of hope and unease over the increasing reliance on Chinese capital. The Times also published a series of interactive visual maps showing how Chinese influence, based on outbound investment from 2005-2013, is accumulating in politically risky countries facing economic woes (Rhodium Group’s Thilo Hanemann, however, noted on Twitter that the piece “overstates China’s importance as investor. You can’t really compare value of announced deals with official FDI flows.”)