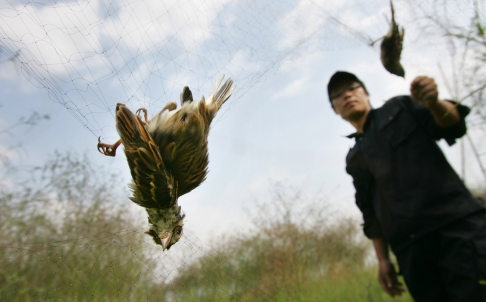 South China Morning Post reports that China’s now endangered yellow-breasted bunting population is in peril due to high demand for the birds as delicacies:

Despite the threat of penalties, the market for yellow-breasted bunting, a migratory bird that flies from Europe to China for the winter, thrives on the mainland. Conservationists say poaching to supply the demand is a leading cause of the sharp decline in the protected species’ numbers over the past decade.

The bird was today listed as endangered by the main global body that categorises the survival status of the planet’s species, the International Union for Conservation of Nature. The union has two higher categories – critical and extinct in the wild – before a species is deemed extinct.

[…] Often known as “rice birds”, the yellow-breasted bunting is a popular delicacy in southern China, especially Guangdong, where locals believe eating the animal can boost their sexual vitality and detoxify their bodies.

[…] The Guangzhou Daily reported last week yellow-breasted bunting was still sold discreetly at certain restaurants and markets in Dongguan, at an average price of 30 to 45 yuan. [Source]

Click through to read about animal protection groups in China, via CDT.