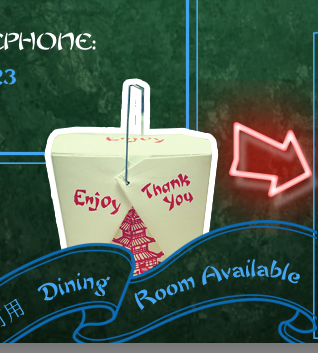 The Globe and Mail reports on Fortune Cookie, an expat owned American-style Chinese restaurant that might be the mainland’s first to serve orange chicken in a little cardboard box:

The idea came to Fung Lam in a moment of desperation. The New York-born American and his business partner were in Shanghai, exhausted after nearly a year of trying to launch a new salads-and-sandwiches restaurant. Months of walking streets, identifying neighbourhoods, buying equipment and negotiating rent had produced just short of nothing.

[…] “I was really missing home, just feeling down. And I came in and said, ‘Let’s get orange chicken and egg rolls and fried rice and just drink some beers.’ I was craving American Chinese food.”

[…] A year later, on the fourth floor of a building jammed with restaurants in downtown Shanghai, Mr. Lam and co-founder David Rossi are mixing up sauces and deep-frying cream cheese in what they believe is the only restaurant of its kind in China. Fortune Cookie, as they’ve called it, is an American Chinese takeout joint, dressed in upscale design but jammed with the tastes of a culinary tradition much transformed since it was transplanted to North America 150 years ago.

[…] “When you get off the plane here the idea of opening another Chinese restaurant in China doesn’t make any sense,” Mr. Rossi says. “But it’s not until you actually live here that you realize that it’s actually American food. It’s not Chinese food.”

[…] To Chinese tongues, some of the American dishes are downright strange. The ingredients used in orange chicken, for example, are better known as “one of the traditional Chinese medicines,” says Ge Mingming, Fortune Cookie’s chief chef. He received training from Mr. Lam’s father, who owns 15 Chinese restaurants in the U.S. The sauces Mr. Lam himself makes every morning are family recipes. [Source]

Fortune Cookie has met largely positive consumer feedback in both English- (Time Out Shanghai) and Chinese-language (dianping.com) user reviews. For a concept that might prove useful when thinking about Fortune Cookie’s success, see the Wikipedia article on Professor Agehananda Bharati’s (aka Leopold Fischer) term “pizza effect”.