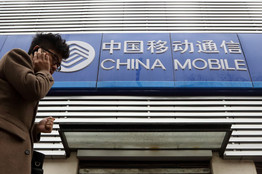 The rollout of iPhones on the world’s largest mobile carrier by users, with over 700 million subscribers, is expected to start later this month, around the time of a Dec. 18 China Mobile conference in Guangzhou, according to two people familiar with the carrier’s plans. China Mobile is one of the world’s last major carriers that doesn’t offer the iPhone.

China Mobile has been in talks with Apple to offer iPhones for several years. But Apple had been reluctant to bring the iPhone to the carrier’s unique and relatively unreliable 3G network. In addition, China Mobile had bristled at Apple’s insistence on sales volume guarantees. [Source]

Update: According to a China Mobile spokeswoman quoted by Reuters, no deal has been finalized: “”We are still negotiating with Apple, but for now we have nothing new to announce.”