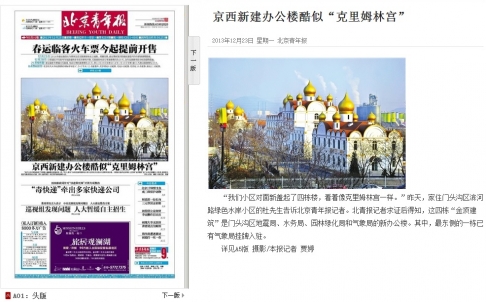 As officials are repeatedly exhorted to remember the lessons of the Soviet Union’s collapse, local authorities on the outskirts of Beijing have erected a lasting reminder to house their offices. From Angela Meng at South China Morning Post:

Mentougou, a largely rural district in western Beijing, has an area of 1,321 square kilometres and some 270,000 inhabitants. Now, it is also home to a group of new government buildings with onion-shaped golden domes, arch windows and white walls, reminding visitors of the magnificent architecture of the Cathedral of Annunciation, a five-century-old Russian Orthodox church located inside the compound of the Moscow Kremlim.

“We had four new buildings in our community; they look just like the Kremlin.” a Mentougou resident, whom the newspaper identified only by his last name, Du, told the Beijing Youth Daily. “It wasn’t until we saw that one of the buildings said ‘Meteorological Bureau’ that we realised it’s a government building!” [Source]

Updated at 22:10 PST: China Real Time’s Richard Silk and Olivia Geng linked to clearer photos of the complex, and contacted the local government:

When contacted by China Real Time, a spokesman for the Mentougou government said he hadn’t seen the buildings himself. But the spokesman, who gave only his surname, Gao, suggested that the pictures circulating online may have been photoshopped to heighten their impact.

“In the images, you can see clear traces of editing,” Mr. Gao said. “For example, it looks very high-end and classy, but in reality it might not be.” [Source]