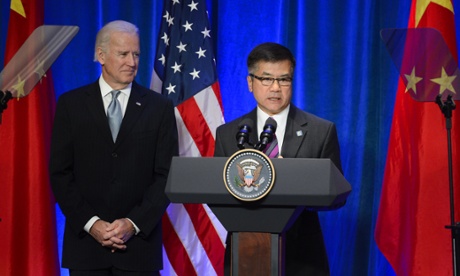 China reacted strongly on Friday to a Japanese parliamentary resolution condemning its new air defense identification zone (ADIZ) over the East China Sea, a topic at the forefront of U.S. Vice President Joe Biden’s agenda during his China trip this past week.

China’s decision last month to declare an air defense identification zone in an area that includes islands at the heart of a territorial dispute with Japan has triggered protests from the United States and its close allies Japan and South Korea.

Chinese Foreign Ministry spokesman Hong Lei told reporters at a daily briefing that China had every right to establish its East China Sea Air Defence Identification Zone, which it said was a reasonable and legal thing to do.

“On this issue, Japan has no right to talk nonsense, and China resolutely opposes this. What Japan should be doing at the moment is to stop these kinds of wrong actions, stop quibbling and stop its provocations,” Hong said. [Source]

Meanwhile, Paul Lewis at The Guardian reports on China’s “highly unusual step” of refusing to participate in a United Nations arbitration process regarding its territorial conflict with the Philippines over the “nine-dash line” in the South China Sea:

The Philippines will submit its formal case to the UN arbitration tribunal of judges, which has agreed to hear the case at The Hague, in March. A preview of their arguments were outlined this week in Washington by Paul Reichler, an expert attorney at Foley Hoag LLP hired by Manila to handle the case.

He said China’s blank refusal to participate in the tribunal process, a move it revealed to the Philippines by way of diplomatic letter in February, marked the first time a state had ever refused to take part in an inter-state arbitration under the 1982 UN Convention on the Law of the Sea.

Under the convention, the panel of senior international judges is still required to issue a ruling in the case, despite China’s non-cooperation, although Reichler conceded there were no way of enforcing any ruling.

But he added: “There is a price to be paid for branding yourself an international outlaw – a state that does not comply with the rules.” China declined an opportunity to comment on the case. [Source]

At 38 North, however, senior fellow at the Center on U.S.-China Relations John Delury argues that while East Asia’s political scene may currently resemble a “hornet’s nest,” generally warming relations between Seoul and Beijing are indicative of a broader, deeper trend in Chinese foreign policy:

Tensions always get more attention than does getting along, but US policymakers would be remiss to see only these fissures. Often overlooked in the flurry of Asia’s maritime disputes and history wars is one of the most important developments of 2013: the blossoming “friendship” between Seoul and Beijing. It began in January, when President-elect Park Geun-hye and President-select Xi Jinping wasted no time exchanging envoys to affirm their intentions to rebuild the relationship after the nadir reached by the end of their predecessors’ terms. Next, then-ROK Joint Chiefs of Staff General Jung Seung-jo landed at Beijing airport in a C-130 transport plane to meet his counterpart, General Fang Fenghui—the first such meeting in over five years. But the real splash came in late June when President Park held a summit with President Xi, delivered a speech in her self-taught Mandarin Chinese at Tsinghua University, and promoted South Korean investment at the new business hub in the ancient central China city of Xi’an. Park struck a deep chord with the Chinese public as her autobiography became a national bestseller, and Beijing accepted her proposal to build a statue of Korean patriot Ahn Jung-geun at the site where he assassinated Japanese official Ito Hirobumi in 1909. Her summit also blew still stronger winds behind the sails of negotiations on a China-South Korea Free Trade Agreement, which are on track to reach completion next year.

The blossoming friendship between South Korea and China, in other words, is taking place across political, economic, military and cultural dimensions. Not since before the Sino-Japanese War of 1894-95 has the relationship been this strong, and the kerfuffle over the overlap between China’s new ADIZ and Korea’s old ADIZ should not distract too much attention from the deeper strategic shift taking shape. It is equally important not to assume Beijing applies zero-sum thinking to the Korean peninsula—quite the contrary. The improved ties with Seoul do not demonstrate a shift in policy toward Pyongyang. If the Obama administration misreads these developments, and fails to develop a proactive response, the situation in Korea will continue to drift away from US influence and in directions divergent to its interests.

The warming ties with Seoul are part of a broader initiative in Chinese foreign policy, one easily lost in the fog of stories about rising tensions in East Asia—namely, the return of friendship. [Source]