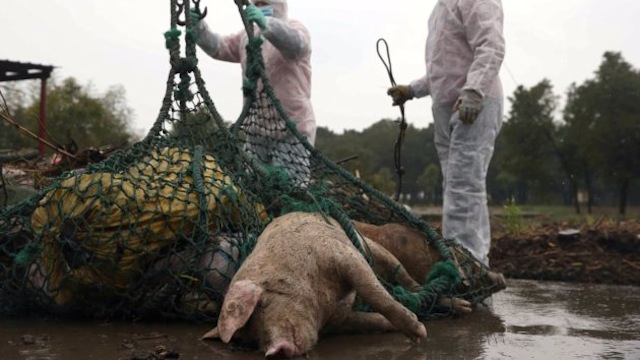 For Shanghaiist, chinadialogue editor Sam Geall reviews ten major environmental stories from China in 2013, from the persistent pall of air pollution to the armada of dead pigs that descended on Shanghai, including the various actions of officials and citizens.

In March, when more than 10,000 pig carcasses floated down the Huangpu River, a major water source for Shanghai, the country had surely experienced the most visibly shocking reminder of its ecological crisis. On the lighter side, this inspired netizens to riff darkly on the Ang Lee film Life of Pi, with posters circulating online for a new horror film, Life of Pig. More significantly, the case pointed to the potentially huge environmental and public health impacts posed by the rapid expansion of pig farming in China. With the causes of the pigfestation still murky, the only thing that’s certain that the social debates around these uncertainties aren’t going away anytime soon, with speculation that everything from avian flu to genetically modified corn caused the pig die-off. And as this year’s litany of grim headlines suggests, simply trying to put a lid on these discussions is a losing battle. [Source]

chinadialogue’s Liu Jianqiang described 2013 as “another year of disappointment for the environment in China,” while the site’s Olivia Boyd compiled a chronological overview of major developments and Tom Levitt highlighted ten of its best pieces of the year.