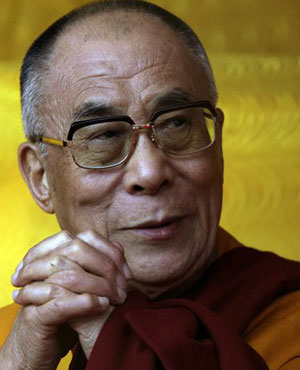 News 24 reports that the Dalai Lama will not attend fellow Nobel Peace Prize laureate Nelson Mandela’s funeral. South Africa has declined to grant him a visa twice in recent years, but it is unclear whether he applied for one on this occasion.

“He has no plans to go,” spokesman Tenzin Takhla told AFP in the northern Indian hilltop town of Dharamsala where the Tibetan spiritual leader is headquartered.

Takhla did not say why the Dalai Lama would not attend Mandela’s national memorial service on Tuesday or the December 15 burial at his boyhood home of Qunu.

But the Dalai Lama was controversially denied a visa to South Africa in 2011 after being invited to give a lecture as part of celebrations for the 80th birthday of Mandela’s fellow anti-apartheid campaigner Desmond Tutu.

[…] China seeks to curb his overseas travels, and warns foreign governments that any visit by the spiritual leader would harm relations. [Source]

Read more about responses to Mandela’s death from various sectors of Chinese society, via CDT.