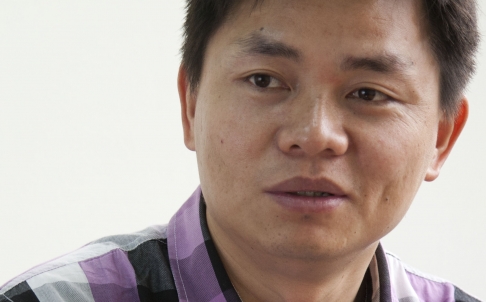 In a case that echoes that of Professor Xia Yeliang, an outspoken professor has been dismissed from the East China University of Political Science and Law in Shanghai, allegedly for his writings which criticized the Communist Party. The Global Times explains the university’s position on Zhang’s dismissal:

Zhang used the school’s automatic communication system to publish a book entitled New Common Sense, the notice said, adding he also took advantage of his identity as a professor to transmit his political thoughts during classes.

As Zhang’s acts seriously violated teachers’ professional ethics and he did not realize or correct them, according to the regulations and procedures of the school, Zhang’s contract will not be renewed. [Source]

But, in an interview with the New York Times, Zhang called his dismissal part of a “witch hunt”:

Zhang Xuezhong, who teaches at the East China University of Political Science and Law in Shanghai, said administrators notified him on Monday that he would be dismissed after he refused to apologize for writings that championed the protections guaranteed by China’s Constitution. Professor Zhang’s teaching privileges were temporarily suspended in August after the publication of an article detailing the Communist Party’s growing hostility toward the nation’s legal system.

“I told them I had made no mistakes whatsoever,” he said in a phone interview on Tuesday. “I’m just a university faculty member who expresses his own opinions, thoughts and proposals, which is absolutely my right. This is an out-and-out witch hunt.”

University officials did not respond to telephone calls and a fax seeking comment. But in an internal school memo that Professor Zhang obtained and circulated online Tuesday, officials also cited an e-book he wrote this year called “New Common Sense: The Nature and Consequences of One-Party Dictatorship.” According to the notice, Mr. Zhang violated university rules by “forcibly disseminating his political views among the faculty and using his status as a teacher to spread his political views among students.” [Source]

Zhang has said that the university failed to provide evidence of his behavior that violated regulations, according to AP:

The South China Morning Post gives more details about his writing that made him a target:

One of the articles he published was about the danger of not upholding China’s constitution.

Zhang protested against the decision. “This is political persecution of a teacher who expresses his thoughts publicly. It will become not only a serious public event, but also be written in shame into the history books,” he said.

Zhang has published a book online, New Common Sense, in which he questioned the legal legitimacy of the governing Communist Party. He has also published several articles calling for more civil rights for Chinese people and for the speeding up of political reform.

Zhang wrote an open letter in May to the minister of education, Yuan Guiren , calling for an end to classes and tests on Marxism at universities. His call went unanswered. [Source]

In October last year, Zhang’s weibo accounts were deleted, and the Guangdong Department of Propaganda banned reporting on him after he wrote about plans to introduce patriotism classes to Hong Kong schools.

Two months ago, Economics Professor Xia Yeliang was dismissed from Peking University. While the university claimed that he did not meet the school’s academic standards, Xia and his supporters say he was targeted for his outspoken political views. Read more about Xia’s case, via CDT.