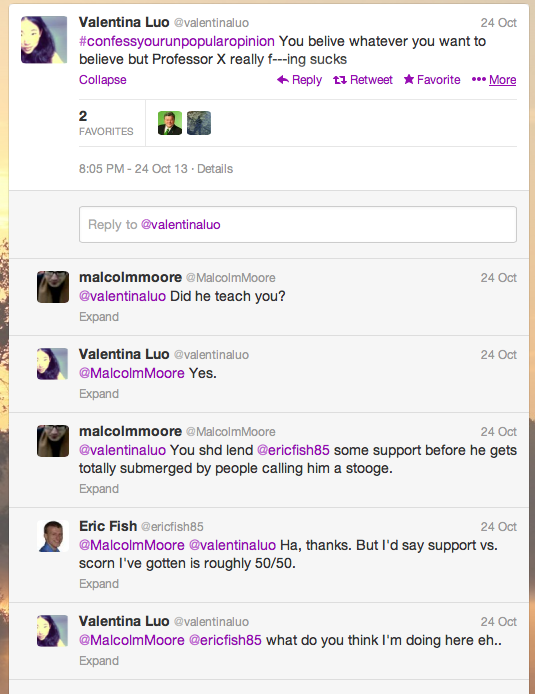 After Peking University expelled its politically outspoken liberal Economics professor, Xia Yeliang, reports that discredit his teaching abilities have continued to challenge the narrative that only politics drove the decision.  On That’s Beijing Magazine, Valentina Luo, who identified herself as a former student of the professor’s, criticized his teaching abilities  and explained on Twitter that she was rising to the defense of Atlantic writer Eric Fish, who received online flack for a story which relied on a handful of student interviews to peg Professor Xia’s alleged teaching performance to his dismissal.  Luo writes:

I attended Peking University’s School of Economics, at the start of the year, the over 150 students taking ‘Principles of Economics’ were instructed to divide ourselves into two classes, one to be taught by Xia, the other by a different professor. “Don’t choose Xia’s class,” older students warned “you won’t learn much there.” They were right.

Though I and the majority of my fellow students chose the other teacher, a number of us were forced to take Xia’s class to make up the numbers.

Unlike many of his students, I don’t remember his political rants. Instead, my memories are of the professor constantly talking about himself: Xia in Berkeley (where he was a visiting scholar from 2005 to 2006), Xia meeting a professor who recently published a book, and so on. Like Qiao Yufei, a fellow student, wrote on Weibo: “[Over a class of two hours] Xia would spend half an hour simply reading the textbook, then boast about which big economists he met while in Berkeley University the rest of the time. And when we had questions about things he didn’t understand himself, he would just make up answers.”[Source]

Echoing Luo’s critique, Peking University released an official statement to discredit Xia’s teaching abilities. The statement cited select comments from students as well as Xia’s alleged failure to “pass the assessment for the renewal of his contract” after he had been given “one more opportunity”  when the School “approved him to go abroad as a visiting scholar, in hopes of improving his professional proficiency”:

The reason that most members of the committee voted against the renewal of Xia Yeliang’s contract lies in the performance of his teaching and research. With regard to his teaching, the result of annual teaching assessments since 2008 showed that he ranked lowest among the School faculties three times, the third lowest once, the fourth lowest once. His best performance was the sixth from the bottom twice. During the same period, more than 340 pieces of students’ complaints and criticism on his teaching were received, including a letter of request signed by over 20 students to demand replacing  Xia Yeliang. Such a demand is extremely rare at Peking University. The students mostly complained about his digressive talks and excessive waste of time on materials irrelevant to the course. Some of the comments are sharp criticism, for example “Please teach economics in class; don’t bullshit!” “You put the cart before the horse.” “Too much superficial digression.” “His words are full of garbage.” Some of the students’ comments described his teaching as extremely shallow, for example, “We need genuine knowledge”, “You teach too little as academic study.” The rumor on the internet that Xia Yelaing’s courses are “popular” is simply untrue. On the registration record of the School of Economics , for the three courses that Xia Yeliang proposed to teach in this school year, one was chosen by seven students, one by eight, and one by only three, which was cancelled because the three applicants failed to reach the minimum requirement of the University.[Source]

In the New York Times, Andrew Jacobs speaks to Wellesley College professor Thomas Cushman who points to the lack of verifiable information in this case: Peking University’s reported data to prove that Xia was fired for academic reasons, Xia’s  denial of their evidence, the few students like Luo who have spoken negatively about him on-the-record, as well as the publicly available online professor ratings that commend his teaching but that the university dismisses as rumors:

Thomas Cushman, a sociologist at Wellesley College, which entered into an educational partnership with Peking University this year, said he remained suspicious, noting that the economist was the first professor to be dismissed from his department in more than a decade — a fact confirmed by university officials.

“There are plenty of people who are bad teachers but who don’t get terminated,” said Professor Cushman, who helped organize an open letter in support of Professor Xia that drew the signatures of more than 140 faculty members. “What troubles me is that there is no verifiable information about his so-called bad teaching.”

Although the letter calls on Wellesley to reconsider its arrangement with Peking University, Professor Cushman said he was more focused at the moment on helping Professor Xia. He said an interdisciplinary program he runs, the Freedom Project, plans to offer Professor Xia a two-year fellowship pending final approval from Wellesley administrators.

“Given how vulnerable Xia is right now, I think the best thing we can do is to follow through on bringing him here,” he said.[Source]

In a Wall Street Journal interview, Xia accuses professors at other American colleges and universities of remaining quiet in order to preserve their five-star treatment in China:

He continues: “Some American faculty members and leaders like to favor the Chinese Communist Party and the government.  Because those guys, when they come to China, sometimes they are treated as honored guests.” That includes, he says, fat speaking fees, grand banquets and five-star accommodations.

Of the Wellesley faculty, Mr. Xia says, “I’m very grateful for their support.” Yet clearly it wasn’t enough. “If Harvard, MIT, Stanford, Columbia [and] Chicago did the same thing,” he notes, Peking University might have held off: “The top leaders would seriously consider it.” Even now some outside pressure might help: “I don’t know whether they could call me back or not, but they might try to make some kind of compensation.”[Source]