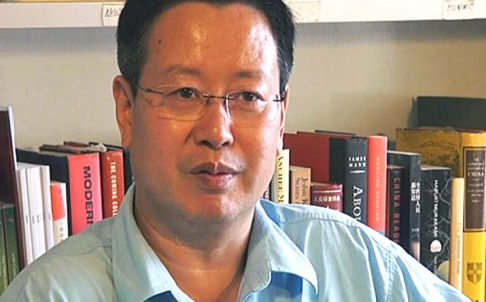 Last week, Peking University dismissed Professor Xia Yeliang, an economics scholar and vocal critic of the Chinese government who was a co-signer of the pro-democracy Charter 08 initiated by imprisoned Nobel Peace Prize winner Liu Xiaobo. In an editorial, the New York Times interprets the dismissal of Xia as part of the “ideological purification campaign” led by Xi Jinping.

Peking University’s decision last week to dismiss Professor Xia Yeliang, an economist and advocate of the free market, is making news around the world. The dismissal could hurt Peking University’s connections with American and European universities, and tarnish its reputation. In the spirit of academic freedom, universities that have collaborative relations with Peking University — Stanford, Cornell, Yale, the London School of Economics and many others — should be putting pressure on China’s leading university to reinstate Mr. Xia.

[…] The rising number of arrests has one aim: to instill fear. As the editor in chief of a prominent publishing house in Beijing said in an interview with The Times: “Self-censorship has become the most effective weapon. If you let something slip through that catches the attention of a higher-up, it can be a career killer.” Peking University’s treatment of Professor Xia sends a message to the entire academic community that destroys free inquiry and has severe societal consequences. [Source]

Earlier in September, as speculation over Mr. Xia’s potential dismissal was swirling, over 130 professors at Wellesley College, which has an academic partnership with Peking University, issued an open letter to support Mr. Xia.

The London School of Economics also stressed intellectual freedom in its response to Xia’s dismissal. However, not every foreign partner of Peking University is taking the same stance. From David Matthews at Times Higher Education:

[…C]olin Riordan, the vice-chancellor of Cardiff University, which runs a joint cancer research institute with Peking, said that Professor Xia’s expulsion was “a matter for Peking University and it would be inappropriate for Cardiff University to take a position or comment on the decision”.

“Universities have their own procedures on accountability, agreed with their governing bodies, and as an autonomous institution we avoid intervening in the complex decisions that other institutions may have to take from time to time,” he added in a statement. [Source]

Some comments on a Chinese professor rating website, Pinglaoshi, show that Mr. Xia was a fairly popular teacher. Yet, Eric Fish at the Atlantic interviews Xia’s students and suggests that aside from political considerations, a poor teaching record may be another reason for Xia’s dismissal:

Xia insists that he was fired for political, rather than academic reasons. Despite being a professor at one of China’s most distinguished universities, he hasn’t received an offer to work at another institution, leading him to suspect that universities were reluctant to hire him. And while he is aware of dissatisfied students, Xia says that given the hundreds he teaches each semester, 340 complaints since 2006 is not an especially high number.  If teacher evaluations were an important criteria, Xia adds, he believes he’d hardly be the only one exposed.

[…] But four former students, contacted independently of one another, say that Xia was an exceedingly unpopular professor who spent most lectures espousing his political views at the expense of teaching the course curriculum. “This was a basic class during our freshman year,” said the student from Xia’s 2010 Principles of Economics course. “We needed to learn this information for later on in our study. But he didn’t teach it well at all. We had to teach it to ourselves later.”

Lesley Zhang, a Peking University student who took the same course in 2008, said she withdrew after several sessions for the same reasons. “He spent most the time boasting about himself as ‘China’s greatest fighter for freedom and democracy’ and criticizing China’s current regime,” she said. “This disappointed those who wanted to learn economics. His political indoctrination disgusted many students. [Source]

Eric Fish later engaged in a debate on Twitter with Leta Hong and others over his article and Xia’s dismissal.

Besides negative evaluations from his own students and colleagues, Mr. Xia seems to have trouble getting good peer reviews outside of Peking University as well. From Elizabeth Redden at Insight Higher Ed:

“My own opinion on Xia Yeliang is that he’s not a qualified researcher,” Yao said. “If you look at his publication record, it’s not up to the standard.” [Source]

As of yet, no other Chinese universities has offered Mr. Xia a position. He tells Patrick Boehler at the South China Morning Post that his future plans may include moving to the United States:

“I hoped some university in China can offer me a position, but so far no single university has dared to accept me,” Xia told the South China Morning Post. “If I [go and] stay overseas for two years, then maybe they will.”

The professor said he was aware of ongoing discussions on inviting him to the US as a visiting scholar, but said that he had not yet received a firm offer. Xia said he wanted to ultimately return to China. [Source]