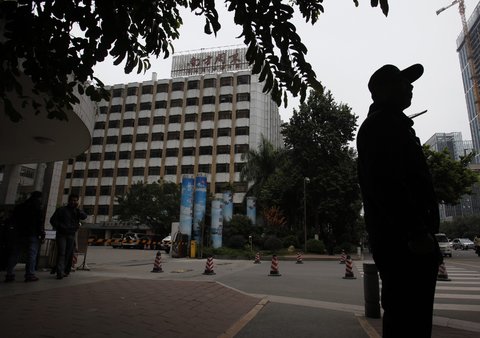 At Sinosphere, Mia Li and Bree Feng introduce ten example questions from a new test on how to be “a good scribe of the China Dream.” The test will be required for all Chinese journalists as they apply to renew press cards next year.

“The point of the test is to teach the reporters, both veteran and new ones, what they are and are not allowed to do from now on. It makes it clear that they are not free do report on whatever they choose to. It is to say: there are rules, ” says Qiao Mu, professor of media studies of Beijing Foreign Studies University, in a phone interview, “the test also raises the ideology studies threshold for the profession of reporters to that of the party officials or civil servants. It is going to influence the working reporters imperceptibly, which gives the party more control on the media.”

“Strengthen the management of the media, do not provide channels for the propagation of the wrong points of view,” read the guidelines, which were published by the official Xinhua news agency.

[…] China media watchers have pointed to a flurry of editorials after Xi spoke to propaganda officials in August as evidence of concern within the party that control over public discourse was slipping. The official Beijing Daily described the party’s struggle to win hearts and minds as a “fight to the death”.

Some reporters and academics, however, have traced the start of the tougher attitude to a strike lasting several days in January by journalists at an outspoken newspaper, the Southern Weekly, after censors scrapped a New Year editorial calling for China to enshrine constitutional rights. Xi had taken over the Communist Party only a few weeks earlier.

American media are concentrated in the hand of the super-rich, and no matter how they appear they all publish content that is to the advantage of capitalist financial cliques (资本财团). So-called “freedom of the press” is in fact freedom of capital. Perhaps sometimes different capitalist financial cliques will be in conflict, and perhaps at times they’ll roast the government over the grill. But the basic nature of media as beholden to capital will not change.

But out of their own private interests, liberal media in China on the one hand turn a blind eye to and refuse to talk about American controls on the news, and on the other hand criticize China’s legal controls that seek to uphold the country’s national interest, their goal being to create confusion. [Source]