Stability and Sovereignty in Cyberspace 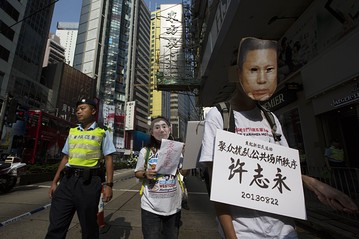 The inclusion of that allegation, tied to the uploading of photos from the demonstrations, is made possible by a judicial interpretation issued in September that added online space to the definition of public space for the purpose of criminal prosecution. The interpretation has been widely described by rights advocates and legal scholars as an effort to lend legal backing to the government’s campaign against online criticism and dissent. Mr. Xu’s lawyer, Zhang Qingfang, says nothing his client did constitutes a crime.

“The judicial interpretation has made it much easier to define peaceful online activities as crimes,” Ms. Wang told China Real Time. “It’s the first time I’ve seen this formulation in an indictment recommendation document thus far, at least for a high-profile case.” [Source]

At the Council on Foreign Relations, meanwhile, Adam Segal cites a recent speech by Lu Wei of China’s State Internet Information Office as “a bracing reminder that the norms of cyberspace remain highly contested.”

[…] Speaking to the Second China-South Korea Internet Roundtable on Tuesday, Lu spoke of the need to safeguard network security sovereignty. Sovereignty, in Lu’s conception, was an evolving concept. Just as the 17th century saw the extension of national sovereignty over parts of the sea, and the 20th over airspace, national sovereignty is now being extended to cyberspace. Information services could cross borders, “but cyberspace cannot live without sovereignty.” States should proceed from the principles of the UN Charter, and Lu suggested that China and South Korea work together to develop a multilateral framework for the governance of the Internet under the UN. [Source]