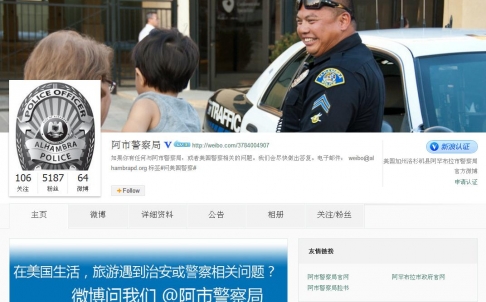 The department’s Weibo page currently delivers local crime and community-related news in Chinese and has attracted a motley crew of followers, including overseas Chinese living in Alhambra city, their relatives on the mainland and curious onlookers who have decided to follow the page for the sheer novelty of seeing a US police agency operate Chinese social media.

“We’ve opened this microblog in order to better serve Chinese residents of the region – everyone from students to businessmen and tourists,” a description on the Weibo page reads. “We would like to eliminate misunderstandings and improve communication with Chinese residents so that new immigrants can integrate into the community as soon as possible…

[…] “I feel that we’re not reaching out to [Chinese immigrants] as much as we should,” Alhambra police chief Mark Yokoyama said during a December 9 press conference when the Weibo page was first revealed, local news portal Alhambra Source reported. “If we increase that engagement [on Sina Weibo], [and] if we increase that communication [and] that trust, I truly believe we’ll have an impact on public safety in our community.” [Source]