As Winter Nears, Beijing is Blanketed in Cabbage 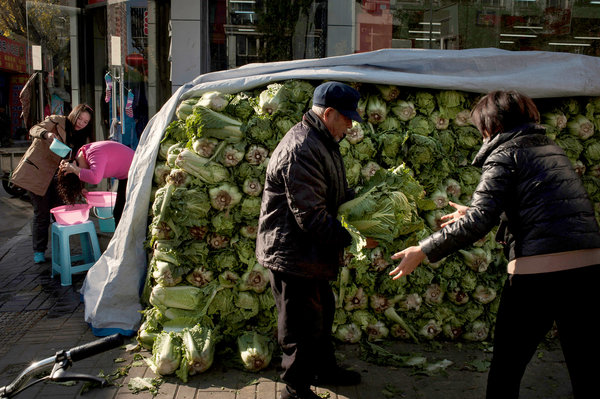 The New York Times reports on this year’s stockpile run on cabbage in Beijing, an annual occurrence fueled by elderly resident’s memories of food shortages during their youth:

In a city crowded with BMWs, upscale malls and produce-packed supermarkets, the stockpiling of cabbage is a vestigial impulse that speaks to an era of scarcity that still haunts Chinese of a certain age.

Older Beijingers vividly recall the hungry winters of the 1950s and ’60s, especially after Mao Zedong’s disastrous attempt to industrialize the nation during the Great Leap Forward, when state-rationed turnips, leeks and cabbage sustained millions. “Back when I was a kid, you never saw a fat person,” said Yang Renzhi, 60, a retired math teacher who was buying three dozen heads for her parents.

[…] Mr. Li, 46, a no-nonsense man who has been growing cabbage for two decades and sleeps on the sidewalk beside his wares, said he sold just under a ton each day during the capital’s two-week run on cabbage.

But he bemoaned an inexorable decline in business. He noted that the average purchase was less than 100 pounds, down from 500 pounds in the early 1980s, when market changes began transforming the nation’s communal agriculture system, making food supplies more plentiful.

[…] “It’s about nostalgia for a simpler time, perhaps one that these old people romanticize,” [retired math teacher Ms. Yang] said, tying cabbage heads to her bike rack. “When my father sees cabbage piled on our 16th-floor balcony, he smiles and knows everything is going to be O.K.” [Source]