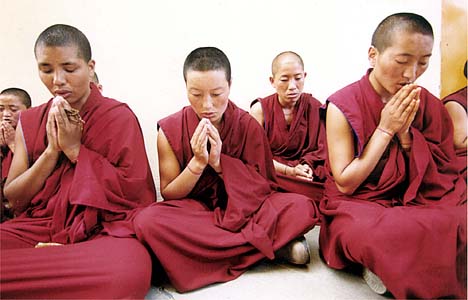 Tibetan writer Woeser has reported that a prominent Tibetan monk from Qinghai has been detained along with 16 supporters who called for his release, AP reports:

The writer, Tsering Woeser, said that rights lawyer Tang Tianhao confirmed the detention of Karma Tsewang, a popular monk in Nangqian county in western Qinghai province. Aside from preaching Tibetan Buddhism, the monk is known for his work on disaster relief, environmental protection and teaching youth the Tibetan language.

Tsering Woeser said Karma Tsewang was taken away by police Dec. 6 while traveling on business in the city of Chengdu. She said the monk was taken to Chamdo prefecture, where he has been detained since.

More than 100 laypeople and monks in Nangqian petitioned the government Dec. 18 to release Karma Tsewang, but 16 of them were detained in the following days, the writer said.

For more on the current situation in Tibet, see a recent CDT post, “Grasping Hearts with an Iron Fist in Tibet.”