Grasping Hearts with an Iron Fist in Tibet 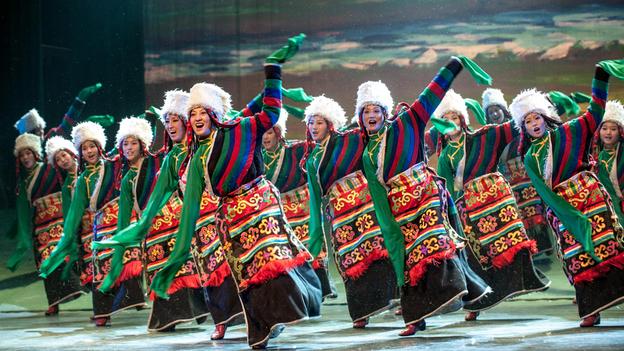 For BBC, Clarissa Sebag Montefiore writes about how the Chinese government’s depictions of minority groups exoticize and marginalize them, while also depriving them of the opportunity to define their own narrative:

China has a complex relationship with its minorities, many of whom chaff under Chinese rule. Riots and unrest have periodically flared up in far-flung regions of the country, including the Tibet Autonomous Region, Inner Mongolia and the western province of Xinjiang (home to the Turkic speaking Muslim Uyghurs). As such, the dominant Han Chinese government needs to control – and contain – its more restive minorities. One way to do this is through propaganda under the guise of the arts. But, unsurprisingly, there is a vast gap between how the Chinese Communist Party represents minorities and how they represent themselves.

Some, like Woeser, an activist as well as a poet and prolific blogger, are fighting back. This October, Woeser published Immolations in Tibet: The Shame of the World; the cover of the book – an evocative outline of swirling flames – was designed by the dissident artist Ai Weiwei (the first edition is published in French). Woeser wants to bring attention to the more than 120 Tibetans who have set themselves on fire in protest of Chinese rule since February 2009. In the book Tibet is described as a “giant prison”.

[…] In China, however, giving Tibetans control over their own narrative, and giving them the room to explore the good, the bad and the spaces in between, is dangerous territory. Instead, matters are simplified. Art that is allowed depicts the region as a touristic paradise. In the music video of the hit song I Want To Go To Tibet, by Mongolian singer Wulan Tuoya, images of the Beijing to Lhasa express train (considered a major feat by the government) are played alongside groups dancing. It was released in 2009 – the year that the Tibetan self-immolations started in earnest, largely as a result of severe crackdowns on religious freedom and suffocating surveillance by government authorities on the monasteries. [Source]

While the pace of self-immolations has slowed in recent months, heightened surveillance and controls have continued in many Tibetan areas. Radio Free Asia reports on raids of monks’ quarters in Driru county, in eastern Tibet, where villagers refused to display the Chinese flag in October ahead of National Day, resulting in a stand-off with authorities:

About 1,000 Tibetans have been detained since Chinese authorities launched the crackdown in Driru in September when Beijing began a campaign to force Tibetans to fly the Chinese flag from their homes. [Source]

With foreign journalists mostly barred from the region, information about the situation on the ground is hard to come by. In a recent talk at Yale University about self-immolations, Professor Carole McGranahan of the University of Colorado at Boulder says there are currently more foreign correspondents in North Korea than there are in Tibet:


Anastasia Corell traveled to Lhasa and reported on what she saw for the Atlantic:

But the dominant aspect of life in Lhasa remains the checkpoints. Some consist of a folding table with two security guards, squeezed in between shops on a crowded street. Others are large pre-fabricated buildings that host teams of Chinese police and are equipped with riot gear including helmets, shields, and fire blankets. Checkpoints on Lhasa’s major roads are surrounded by knee-high spiked metal barriers, protecting the buildings from vehicles.

Leaving the city by car, the checkpoints appear on the highway nearly every half hour. At one of these stops, our Tibetan driver encountered an old friend inspecting papers, a rare sight in a place where authority figures are almost entirely Chinese. Even so, the inspector spoke to his fellow Tibetans in Mandarin. Our guide explained that the inspector had attended college in China—his only chance for a decent job—and now acted more Chinese. “They come back brainwashed,” he said.

In July 2011, now-president Xi Jinping visited Lhasa in his role as vice president, handing out solar-powered lamps inscribed “Celebrating 60 years of Tibetan liberation.” The lamps were a hit in rural Tibet—a region with sporadic access to electricity—and they quickly became known, sarcastically, as “Xijinpings.”

This exchange epitomizes Beijing’s position on Tibet: The Communist Party regularly works to improve the well being of its poorest people. Yet do the Tibetans themselves feel this way? [Source]

According to a BBC report, millions of Tibetan nomads who have been forcibly moved from their land to make way for mines do not feel they are benefiting from government policies:

Tibetan officials in Dharamashala, India, which hosts the office of Tibet’s exiled spiritual leader, the Dalai Lama, say that between 1.5 and two million Tibetan pastoralists have been forcibly displaced from their pastoral lands, while mines for gold and copper ore extraction have been mushrooming.

They say most of the displaced people are not happy and of the more than 130 self-immolations by Tibetans since 2008, about 20 were by members of the nomadic community who were forced to leave their pastoral lands. [Source]

But authorities are still trying to use a two-pronged approach, combining an iron fist with propaganda in an effort to win Tibetan hearts and minds. From Reuters:

China must grasp the heart of the people with one hand and seize the law with the other to strike down illegal groups, the ruling Communist Party chief in Tibet, Chen Quanguo, said in the official People’s Daily newspaper.

To win favour with monks and nuns, officials must ensure all monasteries have electricity and running water, display national flags and images of government leaders, and get access to state television, newspapers and libraries, Chen said.

Officials must “to the greatest degree unite monks and nuns with the masses around the party and government and make them aware of the party’s kindness,” Chen said in a commentary. [Source]