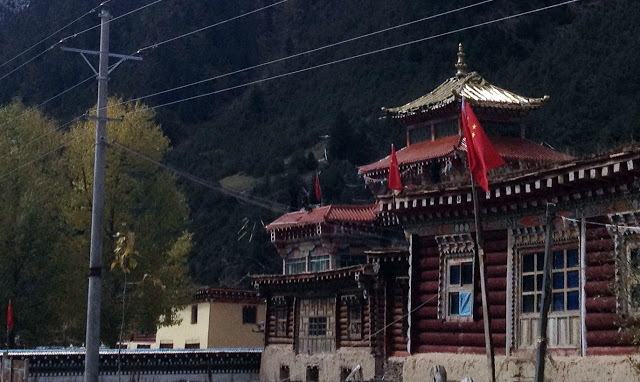 High Peaks Pure Earth has recently translated posts from Tibetan blogger and activist Woeser on the political situation in Chamdo, eastern Tibet Autonomous Region. Most recently, they published a translation of Woeser’s June 24 post on prohibitions on religious activities, and threats that monasteries would be closed and arrests made if locals were to obstruct mining development:

According to reports from local people, the Chamdo region now disallows any work unit employees, students or retired workers to spin prayer wheels or pray. All religious festivals are even more heavily controlled. Not long ago was the month of the Buddhist festival “Saga Dawa”. The local authorities called in an urgent meeting and issued a notice strictly prohibiting any Buddhist rituals. Students were warned by their teachers not to go to a monastery and pray, nor to wear “sungdu” (cords given by senior monks as blessings), otherwise they would be severely punished. The Tibetan language teaching in schools in the Chamdo region is also very bad, one can hardly find a student who can even keep a diary in Tibetan these days.

[…] As the Tibet Daily reported, on March 20, 2013, Chamdo Prefecture held a general meeting on the development of the mining industry at which the member of the Standing Party Committee of the TAR and Party Secretary of Chamdo, Norbu Dhondup, pointed out that it has already been discovered and verified that 6 different types and 53 different classifications of ore in 714 mining areas exist in Gangdise – in the Dangla mountain range mining area, Panggong Lake – in the Nujiang River mining area, Southern Jangtang – in the Zogang mining area, in Northern Jangtang – in the Chamdo mining area. What the party newspaper did not, however, report on was that Norbu Dhondup added another sentence: “If they obstruct mining, monasteries will be closed and villagers arrested”. [Source]

Work groups are stationed in all of the 1700 monasteries of the Tibet Autonomous Region (TAR). I heard that Beijing had planned to station about 3000 members of staff, but in reality the number exceeds 7000. Work groups have also been stationed in the 5400 administrative villages, Tibet’s official media claims that “there are 20,000 cadres stationed in villages”, I don’t know whether this number includes those stationed in monasteries.

The reason why the work groups have been installed in villages and monasteries in the Chamdo region is to implement the TAR policies of the “9 Haves” (namely “to have portraits of the four leaders, to have a national flag, to have roads, to have water, to have electricity, to have a TV set, to have films, to have a library, to have newspapers”); from the end of 2011, on the rooftops of all monasteries, monastery halls and residences of monks as well as on every single farmer’s and herdsman’s house there had to be a five-starred red flag; all monasteries, temples and residences of monks as well as every single farmer’s and herdsman’s house had to hang up portraits of the CCP’s leaders and they had to present these portraits with a Tibetan khata, if not people would face political problems. Farmers and herdsmen had to buy the red-starred flags themselves, depending on the quality, one flag could cost between 3 and 6 Yuan; if they wanted to replace an old flag with a new one, they also had to pay. Only this year, they started giving flags out for free. The work groups would often go to monasteries and families’ homes to carry out inspections. […] [Source]

Click through to read more on Beijing’s policies to account for every Tibetan in the midst of a long wave of Tibetan protest by self-immolation. At his Washington Post blog last week, Max Fisher drew attention to the restive Tibetan county of Driru, to the west of Chamdo, where an unwillingness to display Chinese flags in the lead-up to China’s National Holiday resulted in a standoff between protestors and authorities:

The rural Tibetan county of Driru, though, has defied the rule, with villagers refusing to fly the flag. On Sept. 27, Chinese authorities responded by sending in “thousands” of Chinese troops to force up the flags, according to Tibetan exile outlets and Radio Free Asia, a U.S. government-backed outlet that’s among the few foreign media organizations regularly reporting on Tibet. Now, a week later, Chinese flags are still not flying.

Some Tibetans initially clashed with the troops when they arrived, precipitating a tight security clampdown. “Groups of seven paramilitary policemen have been stationed at each house and are watching the Tibetans,” an unnamed Tibetan local told Radio Free Asia. “Villagers are not being allowed to tend to their animals, and any Tibetan found loitering in the town is being taken away.”

Earlier in the week, hundreds of Tibetans reportedly gathered in the Driru county seat, a village called Mowa, to protest on behalf of the civilians who had been taken away by the Chinese troops. It’s estimated that 40 locals have been taken. […] [Source]

On Monday, Radio Free Asia reported that at least 60 Tibetans were wounded in Driru as locals protested the detentions:

Chinese security forces shot and wounded at least 60 Tibetans as they fired into a crowd demanding the release of a villager who had led protests against orders to fly the Chinese flag from their homes, according to sources Monday.

The incident Sunday in the Tibet Autonomous Region’s Driru (in Chinese, Biru) county of Nagchu (Naqu) prefecture was sparked when a crowd gathered to confront police attempting to search the home of Dorje Draktsel, who was detained last week after taking part in local protests, the sources said. [Source]

Phayul reports that a 68-year-old Tibetan was sentenced to more than 2 years in jail in Driru:

A 68 year old Tibetan man has been sentenced to two years and five month in jail for shouting slogans of independence for Tibet in Tibet’s Driru region that has lately seen heavy Chinese crackdown on Tibetans, said Ngawang Tharpa, a Tibetan living in exile with close contacts in the region.

Dayang shouted slogans demanding independence for Tibet during a cultural performance organized by the Chinese government on September 3 as part of its political reeducation campaign. Dayang was reportedly beaten by security personnel. He was brought to a hospital in Lhasa amid strict surveillance by Chinese police. [Source]

Recently, to the north in Xinjiang province, local authorities in restive Asku reportedly installed a five-starred national flag in a local mosque as part of new religious restrictions. For more on Tibet and Tibetan protest, see prior CDT coverage.