Is China Getting Tougher on Journalists? 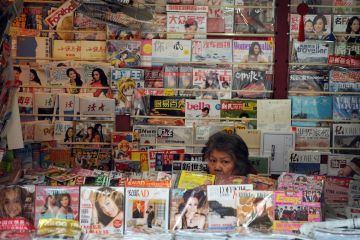 Why has the Chinese government played hardball with the foreign media in recent months, such as by blocking news websites and refusing visas?

Paul Mooney: There are likely two reasons. One, the Communist Party is extremely upset with the reports by The New York Times and Bloomberg News about the wealth of the families of top leaders Wen Jiabao and Xi Jinping. This is a sensitive topic in China that the Party doesn’t want advertised.

[…] What is the outlook for domestic and foreign media in China in 2014? Do you see any sign of the Chinese authorities easing control over the media?

Bob Dietz: I don’t think it’s going to get better. I think the Xi government feels it can apply the same sort of pressure on the foreign media that it has on its domestic media. They won’t throw foreign reporters in jail, as they tend to do with their own press corps, but they will resort to tactics similar to what we’ve been seeing in the last few years — visa games, website blocking and expulsions if they feel it’s necessary. [Source]

Read more about Paul Mooney’s case, via CDT. Bloomberg and the New York Times are two media organizations that have been singled out for visa delays, following investigative reports by both about the wealth of China’s leaders. Michael Forsythe, the former Bloomberg reporter who was dismissed from his job after he revealed details of editorial interference in the publication of sensitive China stories, has now been hired by the New York Times in Hong Kong.

Meanwhile, as Bob Dietz noted above, Chinese domestic journalists routinely experience pressure from the government that also has ramped up in the past year since President Xi Jinping took power.