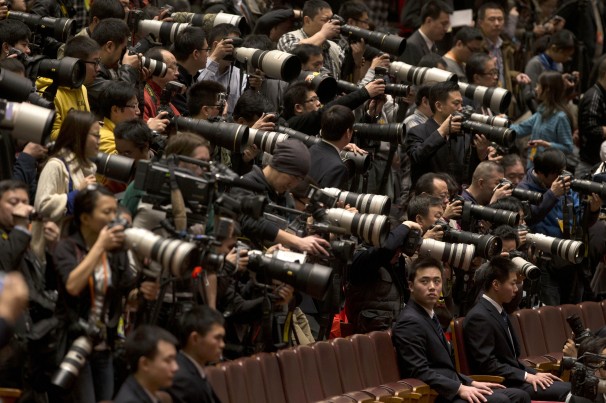 As a tense wait for foreign journalists’ visa renewals ends, for most, The Washington Post’s Simon Denyer surveys the mounting obstacles faced by their Chinese counterparts. After a general deterioration over the past decade, he reports, conditions have tightened more sharply in the past year under Xi Jinping.

Journalists sometimes talk of their profession as “dancing with shackles.” The shackles are provided by the propaganda ministry, through directives to editors about what can and cannot be covered. Reporters at the Southern Weekly newspaper say they received more than 1,000 such messages in a year. Some subjects, such as the 1989 Tiananmen Square demonstrations or criticism of the president, are clearly off-limits, and there is no room for independent reporting on Tibet, the military or religious issues. But elsewhere, lines are more blurred.

Reporting on a neighboring province tends to be easier than exposing corruption closer to home. Often reporters can break news — on a protest or scandal — before the censor swings into action. “If you are quick, you can get stories out,” one senior reporter said. “It’s a cat-and-mouse game.”

[…] A financial journalist, who requested anonymity because she was not authorized to speak to foreign reporters, said many of her stories ended up being deleted, especially negative ones about state-owned enterprises, or pieces on companies owned by high-ranking Communist Party families. Many powerful companies increasingly bribe local propaganda officials or use their political influence to shut down negative reporting, journalists say. [Source]

Denyer highlights an open resignation letter by former CCTV producer Wang Qinglei, which drew considerable attention last month from weibo users, other journalists and censors themselves with its frank expression of disgust at the current media climate.