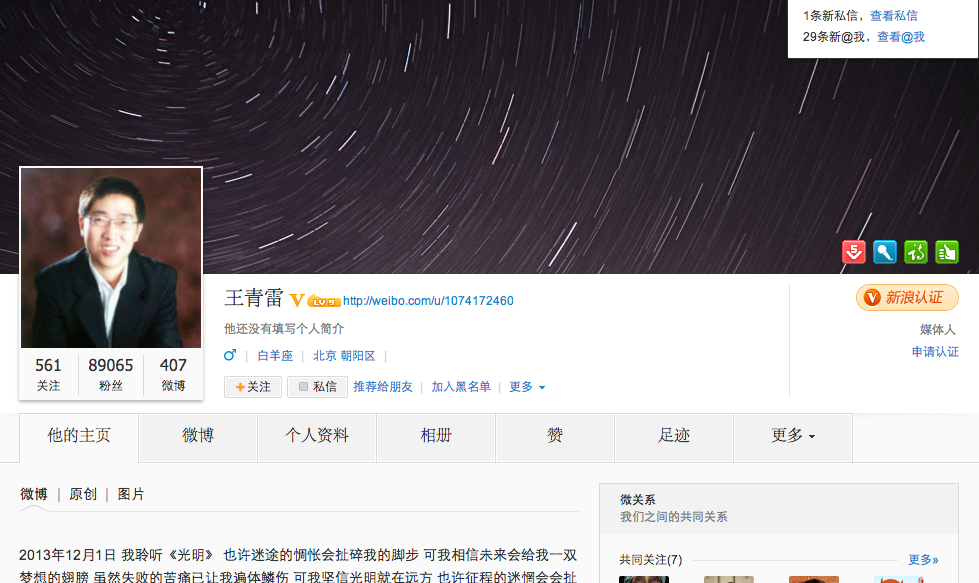 A producer for China’s state broadcaster CCTV said on Monday that he had been fired after he criticized the network’s role in a controversial crackdown on online rumors.

[…] He took issue with China Central Television’s airing of a confession by Chinese-American venture capitalist Charles Xue in which he said he irresponsibly spread gossip online.

[…] CCTV often airs confessions by thieves, prostitutes and other petty criminals, but in recent months, a string of high-profile suspects have confessed to crimes on air, often wearing handcuffs and jumpsuits.

Critics say public confessions deprive the accused of the right to a fair trial.

Wang echoed this criticism in his letter, saying that while fighting legitimate gossip is laudable, the media should not decide who is innocent or guilty. [Source]

Charles Xue’s confession on CCTV came amid an ongoing government crackdown on online rumors, and proved that microbloggers with social capital—also known as “Big V” users—would be primary targets in government efforts to gain influence over online public opinion.

The Wall Street Journal relays the highlights of Wang’s letter, which can be read in its entirety on CDT Chinese [zh]:

[…] Mr. Wang described his disgust at the broadcaster’s reports on Mr. Xue and other influential microbloggers: “We abused the public institution of media to wantonly bombard an individual indiscretion. Journalistic integrity and professionalism were nowhere to be found.”

[..] Elsewhere in the letter, Mr. Wang savages the propaganda system that censors news content. He contrasts CCTV’s shining new office tower and expanded global operations with what he says is the broadcaster’s declining reputation and influence – a trend he attributes to tightened controls.

The voices we hope to broadcast and the attitudes we hope to express have been silenced over and over again. A leader once joked with me: ‘When you’re choosing topics for reporting, you have to take their measure. Basically, whatever you feel you ought to report or want to report, that’s what you can’t report.’ What a cruel and stifling reality for a journalist!

In the space of a year, we get upwards of a thousand propaganda orders.  We should ask ourselves: How many of these orders were issued in the national interest, and how many were issued to serve the political and economic interests of some individual, group or leader? And how often did we castrate ourselves as a result of trying to fathom the attitudes of high officials? Our leaders should understand that if the amount of news you can’t report climbs too high, people won’t believe the news you can report – because it’s propaganda chosen with a purpose. [Source]

Wang’s letter was applauded by some of his colleagues in the Chinese media, and quickly removed from Sina Weibo. From the New York Times:

By midday Monday, the letter had been deleted from China’s most popular microblog platform but it was still circulating online and receiving support from Chinese journalists who saw Mr. Wang as a victim of the country’s restrictive media environment.

“These truths are the best record of Chinese reporters’ helplessness, sorrow, distress and worry,” wrote Wu Fei, a media professor at Zhejiang University, in a Sina Weibo post about Mr. Wang’s letter. Mr. Wu’s post was later deleted too.

With Wang’s original letter deleted from Sina Weibo, a recent censorship directive from the State Council Information Office—the office overseeing the bureau in charge of Internet censorship in China—seeks to scrub any trace of it from the Chinternet:

* The title translated above as “Farewell, CCTV” (别了，司徒央视) is a reference to Mao Zedong’s 1949 article “Farewell, Leighton Stuart,” (别了，司徒雷登) in which the Chairman said goodbye to the KMT era U.S. Ambassador to China.