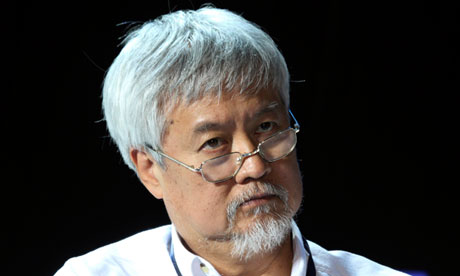 The detained social media celebrity and venture capitalist Charles Xue said on state television that he had posted irresponsible information online to his followers and added that “freedom of speech cannot override the law,” according to a Reuters report.  The Chinese American businessman’s on-air confession follows a recent government-sponsored initiative to crack down hard on Internet “rumors” by targeting influential weibo users or “Big Vs,” including the recently detained billionaire Wang Gongquan.  The government’s move to detain popular users and encourage TV confessions has worried lawyers who claim that the crackdown “makes a mockery of due process”:

“My irresponsibility in spreading information online was a vent of negative mood, and was a neglect of the social mainstream,” Xue said.

Xue, also known as Xue Manzi, had 12 million followers on Sina Weibo, China’s Twitter-like microblog site. He was shown on state television in August after being detained on an accusation of visiting prostitutes.

Caixin’s Xin Haiguang, however, shifts the focus from accusations against the Big Vs by  examining the roles that officials play in circulating rumors online:

When Internet rumors whizz through cyberspace, one simply can’t be oblivious to the information that is provided by the authorities. Often times the origins of false information on officials comes from officials themselves. Recently, the state-run Xinhua News Agency attempted to explain the phenomenon of “official rumors” in hopes that the government agencies can reconsider their approach in dealing with the release of information to the public.

The actions of the state-backed Xinhua are laudable inasmuch as they have been a reflection of public demand. Many Internet users have raised the question themselves: There is much disinformation on the Internet which may potentially affect social stability. But how is the false information from the officials and government agencies to be assessed?

A good example is the Liu Tienan case. Launched in August, the corruption probe over Liu, the head of the National Energy Administration (NEA) was the subject of many rumors months before the official announcement.  Prior to official statements made by the government, the NEA branded all news regarding the investigation on Liu as “nonsense,” and “pure slander.” The NEA later went on to say they would take legal action against anyone found repeating false rumors. However, when Liu’s criminal investigation was officially made public, the NEA did not retract any of these statements.[Source]

A Xinhua report via Global Times argued that the general public supports the official policy that freedom of speech should not give people the right to spread rumors:

China is ushering into an unprecedented Internet era with about 591 million netizens, prosperous e-commerce and broad platforms, such as Weibo and Wechat, for netizens to express views. Moreover, many successful online whistleblower cases have demonstrated that Chinese netizens are becoming an important anticorruption force.

At the same time, Internet rumors or blackmail exist and could easily run riot. Online rumors circulate far more speedily and widely than those in real world and affect victims’ reputations and interests more seriously. They inflict great emotional pain to victims and their families and caused vile social impacts.[Source]

Meanwhile, Tech in Asia emphasizes that speaking out on social media may be especially risky now following the detentions of Xue Manzi and popular Kunming opinion leader Dong Rubin, who was detained for allegedly misreporting the worth of his business.