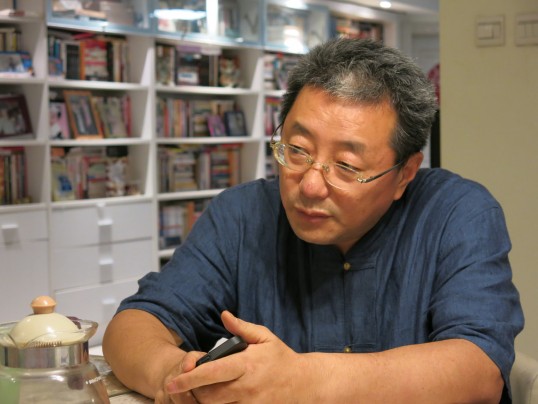 In a statement published on early Saturday morning, hundreds supporters of China’s New Citizen Movement called on the Chinese government to release prominent venture capitalist Wang Gongquan, following his detention on Friday they described as “barbaric” and “cruel.”

[…] On the same day Wang was taken away by police,  the wife of Chen Baocheng, a journalist who was detained in August in Shandong Province,  was notified by police of his official arrest. Chen was detained along with seven other villagers for protesting against the forced demolition of their homes in Shandong.

Chinese media also confirmed on Friday that Dong Liangjie, an outspoken blogger and environmental activist, was detained this week in Beijing on suspicion of “spreading online rumours.” [Source]

Global Times responded to the outcry with an editorial arguing that “unconditional support for Wang is imprudent”:

Currently some liberals are seeking to build a public opinion atmosphere where anyone in their camp being sent to court is a victim of “political persecution.” Even the prostitution scandal of Chinese-American investor Charles Xue has been seen by them as an “official crackdown on freedom of speech.”

By doing so they are actually claiming that they are not subject to law in China, and that they can only be judged by public opinion, especially that on Weibo. While seeking to build up such a privilege, some of them may lose respect for the law in real life. [Source]

As The New York Times’ Edward Wong reported, however, the context of Wang’s detention does little to dispel suspicion that it was politically motivated:

Since a Communist Party leadership transition last November, advocates of more liberal policies have urged the new leaders to follow and enforce the Chinese Constitution, which is routinely ignored by the party. Senior officials have pushed back against those calls, and editorials in official party publications in recent months have criticized supporters of constitutionalism.

That attack on liberal ideas has coincided with a security crackdown on dissent. Many liberal Chinese have been detained by the police. The crackdown has extended to prominent Internet personalities who often discuss social issues on Twitter-like microblog accounts, which can have millions of followers. Chinese Human Rights Defenders, an international advocacy group, has estimated that nearly 60 Chinese involved in political activism have been detained.

Mr. Xu was arrested this summer against that backdrop. At the time, Mr. Wang spoke with journalists about his plight. Reporters also contacted Mr. Wang when Mr. Chen was detained temporarily last month. Mr. Wang said in an interview: “A lot of people have asked me, after Xu Zhiyong and Xiao Shu, are you worried? I don’t know. Up to now, state security hasn’t contacted me. But on the day I decided to work with Xu Zhiyong, I had already prepared for the worst.” [Source]

Wang had previously refused an invitation to “drink tea” with police because, he said, he “wanted to conduct a small experiment. I wanted to test if they came to me just to talk or if they want to pursue me.” A 2011 Caixin profile described another of Wang’s scientific explorations:

[…] Wang subsidized the publication in China of a book entitled A Review of Civil Society. After its first edition was published, officials at a local government agency tracked down Wang and ordered him to recall all copies “immediately.” Tax officials put pressure on Wang as well by investigating his company’s accounts and tax records.

Angered by the government’s demands, Wang said he told officials that “you can’t censor my book. I have freedom of the press.”

Wang’s friends urged him to reconsider. “Don’t you want to live?” some asked.

But he refused to back down, and did not recall the book. Eventually, the government propaganda department settled the issue by buying up most copies, although Wang kept a few books for himself. [Source]