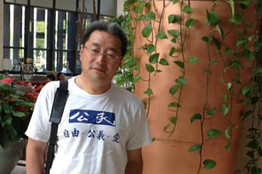 Police detained billionaire venture capitalist and outspoken civil society advocate Wang Gongquan on Friday on suspicion of “gathering crowds to disturb social order.” Fellow activist Xu Zhiyong was formally arrested on the same charge last month. The detention is the latest in a series of moves against Chinese liberals, and comes amid a campaign to rein in influential “Big V” social media voices. From Josh Chin at China Real Time:

Roughly 20 police removed Wang Gongquan from his home in Beijing on charges of disturbing public order shortly after noon on Friday, according to Chen Min, a family friend.

Mr. Wang, a sometimes outspoken critic of the government, is a prominent member of the “New Citizens Movement,” a loose collection of mostly white-collar urbanites who have issued calls for greater protection of the right to free speech and other individual rights enshrined in China’s constitution. Members of the group have also been aggressive in pressing officials to publicly disclose their assets.

[…] Founder of the venture capital arm of multibillion-dollar investment firm CDH Investments LLC, Mr. Wang is a colorful figure, known in China for his politics and romantic exuberance as much as for his success as an investor. Before his account was deleted, he was known to pepper the popular Twitter-like microblogging site Sina Weibo with a steady stream of poetry and social criticism. He grabbed headlines in 2011, when he announced Weibo that he was quitting his job and eloping with his mistress. He later returned to his wife and also went back to work, though he left his job again a short while later. [Source]

Lawyer Teng Biao told The Telegraph that it would be “very worrying” if Wang was not released within 24 hours. Journalist Chen Min—also known by the pen name Xiao Shu—added that he believed that Wang would be held for longer and placed under criminal detention. Chen, who has described Wang and Xu as “not only heroes of civil movements, but also champions of public interest and allies of the Communist Party”, was among the co-authors of a written statement on Wang’s detention, posted at China Change:

[…] Fellow Chinese, when the nest is upset no egg is left intact. Do not let our country fall any deeper into the abyss in the opposite direction of modern civilization without doing anything. Take actions to defend the effort to build a civil society, for, by doing so, we are defending ourselves, each one of us. [Source]

Though Wang is accused of “gathering crowds to disturb public order”, he disavowed the use of street protests in a July interview with South China Morning Post, arguing that they would only be counterproductive:

SCMP: Why is that?

Wang: Because the Communist Party doesn’t allow it. It’s such a simple reason!

SCMP: Then what’s the meaning of your activism?

Wang: When the government hasn’t been able to well understand this, and can’t treat such matters with ease, you go into the street and they easily get nervous. And when they get nervous they resort to excessive defence. And that brings unnecessary trouble and sacrifice. That’s why I am against it. When I hear people talk about such things, I ask them not to do it. I don’t know if this puts me on the softer side among the circle of civil society activists. [Source]

Wang spoke of his attitude towards the prospect of arrest, a topic he also discussed in an unpublished excerpt from an interview for Bloomberg Businessweek’s Chinese edition. From Beijing Whisper:

“This is not what we are hoping for, but if, hypothetically speaking, the government did not have such generous tolerance, and insisted on looking at it this way, [and as a result I was] pressured or arrested, then there is nothing I can do, we believe this is the price we pay for being patriots. If it happens, then it happens, I am not deliberately preparing myself, because I have no such fear. Of course, I understand what you are saying, if that were true, what can I do? We would only wish everyone to be good citizens, we are only hoping to push for a new citizens movement, renew this society, all based on the maximum extent possible to obey the law. If in the end they still believe they must make arrests, they so be it, it is like us walking in the streets, of course are are on guard, but we would not avoid the streets altogether because we know there are thugs.” [Source]

Wang’s detention coincides with China Change’s translation of a 2009 essay by Xu Zhiyong, Who Are the Enemies of China?:

Citizens who fight for justice may give headaches to government officials, they may be devoted believers, they may take on risk to defend what they believe to be right, they may helplessly sing the song “Eluding the Cat” or the “Grass Mud Horse” online (both songs challenge the authority of the regime – editor), they may have different views about the nation’s history, or they may be biased against the CCP, but they are not enemies of China. [Source]