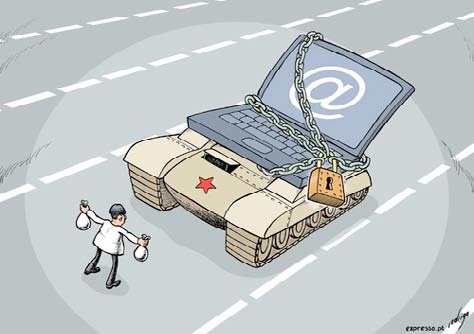 Since Xi Jinping came to power just less than a year ago, hopes that his administration would oversee substantial political reform have been dissipating amid frequent crackdowns on the country’s media and developing civil society. An infographic from the South China Morning Post plots arrests under the new administration’s watch to show that state suppression of the politically-liberal is gaining momentum. From the accompanying article:

Wen Yunchao, one of the most prominent voices in China’s dissident community, has been monitoring arrests and convictions in this year in China from New York City. His list of detentions shows how China’s new Communist Party leadership under Xi Jinping is dealing with those who oppose party rule.

Wen’s records are incomplete – they don’t include people arrested in connection with ethnic movements, those prosecuted for involvement in the religious group, Falun Gong, or secret arrests unknown to online activists. The information he has gathered comes from reports from human rights groups, social media and the dissident community. Many of the arrests could not be independently verified. Yet Wen insists his records show a growing trend of repression under Xi Jinping.

[…]Wen said he thought political reforms have become less likely. “Internally, momentum has stalled”, he said. “Those outside the system have lost patience.” Wen, who started out as a journalist with Guangdong TV, said he has no plans to return to his home country. [Source]

While crackdowns on dissent have long targeted those who take their opinions to the streets, many who use the Internet to voice concern are increasingly finding themselves in government crosshairs. Looking at the recent arrest of prominent liberal web-user Charles Xue, Bloomberg defines the term “Big V,” and notes government moves to control those leaders of online public opinion:

With more than 12 million followers, Xue counts as a “Big V,” the informal term applied to a few hundred high-profile users who have had their identities verified by Sina Weibo. According to the state-owned Xinhua news agency, Sina and QQ, owners of the two largest Chinese microblogs, have approximately 200 account holders with more than 10 million users each. Though the term has nothing to do with politics, informally “Big V” is widely used to refer to a politically liberal group of popular microbloggers who argue for the rule of law, constitutionalism and the right to mouth off without being censored.

Predictably, this has brought them under the jealous eye of a Chinese Communist Party still nostalgic for its pre-Internet monopoly on the levers of public opinion. Over the last few months there has been an uptick of Party commentary suggesting that Big Vs and other public intellectuals represent destabilizing influences on society. Then, on Aug. 10, Lu Wei, director of China’s State Internet Information Office, convened a forum (which was later televised) on “the social responsibilities of Internet celebrities.” In attendance were eight Big Vs, including the avuncular 60-year-old Xue Manzi [Charles Xue]. According to Xinhua, the attendees agreed “that everyone should be responsible for what they say and do online as the Internet is also subject to laws and moral rules in the real world.” [Source]

Offbeat China looks at how the arrest of Charles Xue is influencing the behavior of his “Big V” peers:

The purpose of the current online crackdown, as many netizens noted, is to discipline those “big V” status microbloggers to further tighten control over the Internet. Like one “big V” micrblogger 王瑛006 commented: “We need to look out. Someone is reinforcing people’s fear of talking about politics.”

Will it work? Well…it depends. China is never short of media organizations that are keen on self-censorship to avoid troubles. When it comes to individual online celebrities, the story is the same.

For example, another popular social commentator on Weibo 北京厨子 deleted all his 70,000+ Weibo posts out of fear of further crackdown. “I’m on Weibo for fun. Now it feels like a class war.” He explained. Many of his followers called him a coward. But there were also supporters. “The storm is coming. He is right to prepare early.” One netizen 八根草吖 commented.

Others choose a different tactic to show their compliance. Ren Zhiqiang, real estate tycoon and one of China’s most prominent Weibo celebrities with more than 15 million followers, said on Aug. 26 that he has been paying several thousands of Party membership fees every year, and that he has always believed in communism. [Source]

The Economist has more on government efforts to guide public opinion by treating the Internet as an ideological battlefield akin to the physical world:

Authorities have […] made clear that microbloggers who break the strictures can be treated just as if they were causing a real-world ruckus. On August 21st Legal Evening News reported that Beijing police now consider the online world as much a public space as the real one. It was a “judicial breakthrough” that appears to be the legal basis for some recent detentions.

Zhang Qianfan, a professor of law at Peking University, recently wrote a critique of this legal approach, suggesting that order cannot be maintained on the internet, nor should it be. By nature, he wrote, the internet is a noisy place. “The government should step aside. Once it interferes with the internet, we will soon find it becomes the biggest rumour-monger.” [Source]

Last week, “rumor-mongers” Qin Zhihui and Yang Xiuyu were arrested as part of an intensifying campaign to “eradicate the soil of Internet rumors” [zh]. When Charles Xue was arrested, China’s state media highlighted his links to Qin. While the arrests reported so far have been of Sina Weibo users, authorities have also issued a warning to users of mobile app WeChat. Tech In Asia reports:

Recently we’ve seen a couple stories about police cracking down on Sina Weibo rumor-spreaders. But Weibo isn’t the only platform you can spread rumors on, and Tencent’s uber-popular mobile chat appWeChat is apparently being watched by the police, too. In an Oriental Daily report, a representative of China’s internet police told reporters that spreading rumors on WeChat is also a crime:

Ding Renren [the police spokesman] said that WeChat is also a public space on the internet, and although the audience is a more limited group [than the audience on Weibo], if you spread rumors or false information that you haven’t verified in a public space, that is illegal.

Apparently, that even includes passing rumors around to your friend circles on WeChat, so be careful. [Source]

Also see the Global Times on the success and importance of the anti-rumor campaign, or Caixin’s timeline showing that the campaign is gaining speed. For more on state crackdowns or online public opinion, see prior CDT coverage.