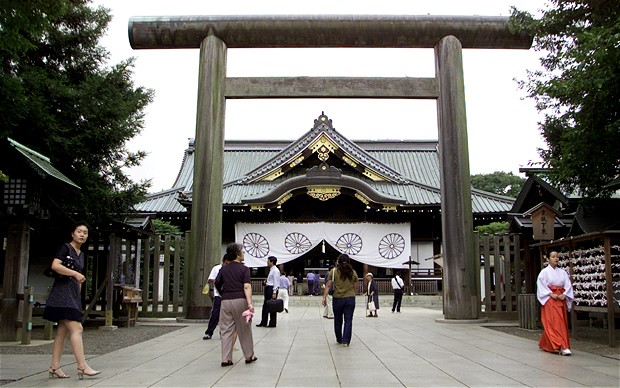 The Chinese and Japanese ambassadors to the U.K. have appeared on the BBC’s Newsnight after trading Harry Potter-themed denunciations in The Daily Telegraph. Though the two shared a studio, they sat apart, and were interviewed separately. After China’s Liu Xiaoming compared Japanese militarism to Potter’s nemesis last week, Japan’s Keiichi Hayashi urged China on Sunday not “to play the role of Voldemort in the region by letting loose the evil of an arms race and escalation of tensions.” The exchange began after a visit last month by Japanese prime minister Shinzo Abe to the Yasukuni Shrine, which honors Japan’s war dead including some convicted of war crimes against China and South Korea.

Newsnight host Jeremy Paxman quizzed Liu and Hayashi on historical grievances and their countries’ competing claims to the Diaoyu (or Senkaku) Islands. He asked Hayashi how Japan could call for dialogue while refusing to acknowledge the dispute, and whether the country is seeking to reestablish itself militarily. Hayashi responded that “the track record of the Japanese commitment to peace has been very strong,” and that it has “no intention of changing the core tenets of our pacifism.” He contrasted Japan’s “utmost self-restraint” with China’s “dangerous provocation” in “challenging the status quo by force and coercion. It’s completely against the international order.”

“Do you think it helps things to use childish abuse?” asked Paxman. “Comparing people to Voldemort, for example?” Hayashi replied that Liu had started it.

Paxman then crossed the studio to join the Chinese ambassador at another table. (“It’s not a seating configuration we frequently suggest to guests,” tweeted editor Ian Katz.) Liu countered that it was Japan that had disrupted the status quo when, after the issue had been peacefully “shelved” for 40 years, it moved to nationalize the islands in 2012.

While Paxman described the island dispute as “apparently piffling,” Eurasia Group’s Ian Bremmer told The Wall Street Journal that a clash between the two countries would be “the greatest geopolitical danger in the world in 2014” if “the Chinese come after the Japanese in a serious way, because they see that as a lever to relieve some of their national strains.”

As destabilizing as the islands’ nationalization has been, it averted an even more provocative purchase by hawkish then-governor of Tokyo Shintaro Ishihara. Japan announced on Wednesday that it now plans to nationalize another 280, in addition to 99 already brought under government ownership by 2011. Its Headquarters for Ocean Policy reassured the South China Morning Post, however, that none of the latest batch is under dispute by other countries.

Liu’s invocation of Voldemort was the most colorful shot in a sustained barrage from Chinese officials and media, who accused the “hypocritical” and “self-deceiving” Abe of “leading Japan in the wrong direction” into “worshipping war criminals” and “casting [a] dark spell on public opinion.” China’s U.N. envoy Liu Jieyi echoed these warnings on Wednesday, telling reporters that “the question inevitably arises as to what Abe is up to, where does he intend to take his country?”