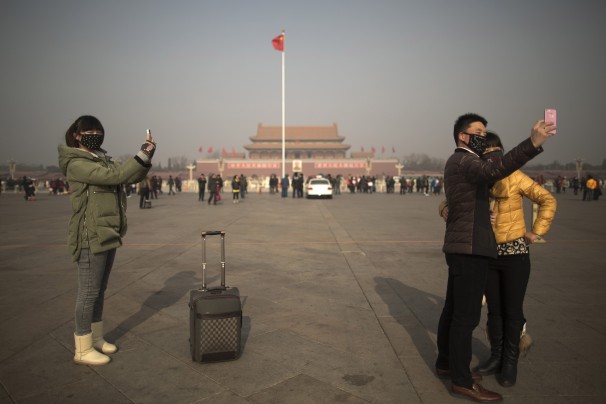 William Wan at The Washington Post outlines inventions for combatting China’s air pollution as the country looks to limit its New Year fireworks:

Beyond the government, a cottage industry has popped up, tinkerers who are producing anti-pollution devices — some practical, others wacky artistic statements.

There is a bicycle that purifies air as you pedal. And a growing spectrum of do-it-yourself air-filtering machines, from simple duct-tape concoctions to elaborately engineered models.

“It’s a perfectly natural response when you are confronted with a problem,” said Gong Zhiqiang in Beijing, a mechanical engineer who spends his nights fine-tuning his designs for amateur air filters. [Source]

Meanwhile, at The New York Times, Gardiner Harris reports that despite Beijing’s reputation for poor air quality, the situation in New Delhi is actually far worse:

But for the first three weeks of this year, New Delhi’s average daily peak reading of fine particulate matter from Punjabi Bagh, a monitor whose readings are often below those of other city and independent monitors, was 473, more than twice as high as the average of 227 in Beijing. By the time pollution breached 500 in Beijing for the first time on the night of Jan. 15, Delhi had already had eight such days. Indeed, only once in three weeks did New Delhi’s daily peak value of fine particles fall below 300, a level more than 12 times the exposure limit recommended by the World Health Organization.

“It’s always puzzled me that the focus is always on China and not India,” said Dr. Angel Hsu, director of the environmental performance measurement program at the Yale Center for Environmental Law and Policy. “China has realized that it can’t hide behind its usual opacity, whereas India gets no pressure to release better data. So there simply isn’t good public data on India like there is for China.” [Source]

Read more about air pollution in China via CDT.