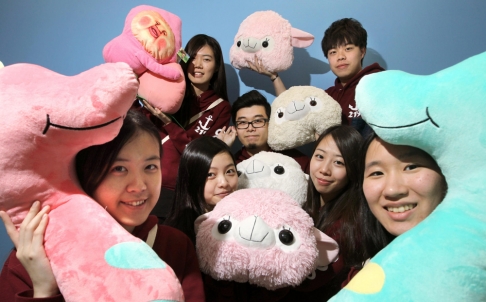 With the Year of the Horse beginning next week, The South China Morning Post reports from Hong Kong, where plush “Grass-Mud Horse” trinkets are becoming popular in joint celebration of free speech and the imminent Chinese zodiac:

The mainland symbol of dissent against censorship is proving a popular choice of product for stalls at the Lunar New Year fairs, which will welcome the Year of the Horse from Saturday.

With a moniker that sounds in Chinese like a phrase suggesting an unspeakable act with one’s mother, the grass mud horse – supposedly a species of alpaca – has been adopted by mainland internet users to mock the government’s efforts to crack down on obscenity

[…]Tommy Yip Kwan-yeung, who will run a stall with his classmates from City University’s department of management, will sell a cushion shaped like the head of the grass mud horse. With a space inside, the cushion can be used as a hand warmer.

[…] The team picked the animal for its funny face rather than its vulgar links, he said, but if buyers chose it for another reason, “we have nothing against it”. [Source]

For more on the Grass-Mud Horse, see prior CDT coverage.