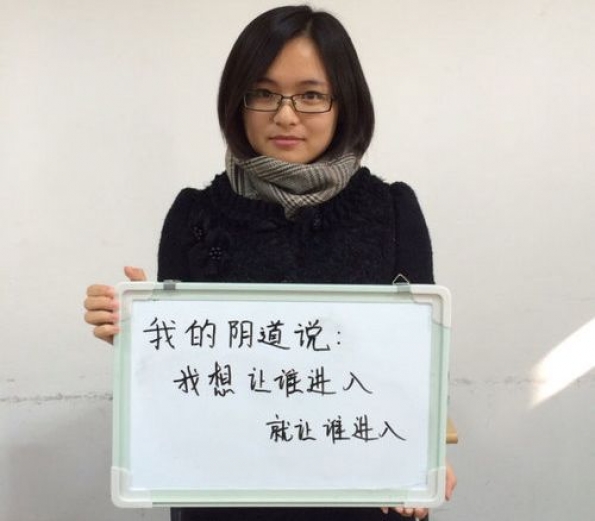 The storm surrounding an adaptation of The Vagina Monologues by 17 female students at Beijing Foreign Studies University last year was selected by gender equality activists as one of the top ten stories of 2013 relating to sex and gender. From James Miles at The Economist:

Announcing such a list has been an annual event since 2008 when Fang Gang, who directs the Institute of Sexuality and Gender Study at Beijing Forestry University, launched the idea as a way of promoting “human rights and gender equality” (as China Youth News, a Beijing newspaper, quoted him as saying in this report in Chinese). This year, however, one story in particular appears to have captured the imaginations of the panel’s audience. It was an unusual display of sexual defiance by 17 female students at Beijing Foreign Studies University. In November the women posted photographs online of themselves holding placards with slogans such as “My vagina says, do not treat me as a sensitive word”, “My vagina says, I need respect” and, pictured above, “My vagina says, whomever I want to let in, I’ll let in”. Many in the audience made clear their support by displaying their own such slogans, and posting these too online (in the case of men, quoting their penises).

[…] Explaining their decision to include the incident in their top-ten choices, the panelists wrote that vitriol aimed at students had revealed “the desire of a patriarchal culture to control women and their bodies”. Chinese media, however, have been more reticent. In a terse report on the scholars’ choices, China Women’s News (here, in Chinese), a Beijing newspaper run by the party-approved All-China Women’s Federation, failed to mention the story about the V-word. [Source]