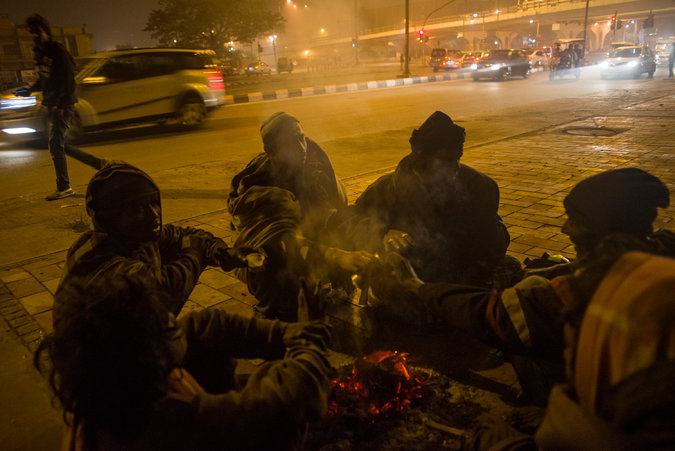 In mid-January, air pollution in Beijing was so bad that the government issued urgent health warnings and closed four major highways, prompting the panicked buying of air filters and donning of face masks. But in New Delhi, where pea-soup smog created what was by some measurements even more dangerous air, there were few signs of alarm in the country’s boisterous news media, or on its effervescent Twittersphere.

Despite Beijing’s widespread reputation of having some of the most polluted air of any major city in the world, an examination of daily pollution figures collected from both cities suggests that New Delhi’s air is more laden with dangerous small particles of pollution, more often, than Beijing’s. Lately, a very bad air day in Beijing is about an average one in New Delhi.

[…] “It’s always puzzled me that the focus is always on China and not India,” said Dr. Angel Hsu, director of the environmental performance measurement program at the Yale Center for Environmental Law and Policy. “China has realized that it can’t hide behind its usual opacity, whereas India gets no pressure to release better data. So there simply isn’t good public data on India like there is for China.” [Source]

At The Times’ Sinosphere blog, Edward Wong noted possible explanations: among them, that China’s now abandoned efforts to conceal the problem had ultimately backfired:

Ananth Krishnan, the China correspondent for The Hindu, has been mulling over this disparity in public dialogue on air quality. He posted tweets about it in December, during a bad pollution day in Delhi. One of his conclusions was that the United States Embassy in Beijing had helped raise awareness in China by posting on Twitter for the past several years the air quality readings from a rooftop monitoring device.

[…] Mr. Krishnan said in an interview that Delhi had been making the same kind of data available to the public well before Chinese officials agreed to release their numbers, and that the Indian numbers proved without a doubt that the air quality in the Indian capital was poor. However, he said, there has never in India been populist demand for the government to change policy to improve the air, as there is now in China.

“I think when you have the sense that they’re hiding something, it galvanizes public attention in a counterintuitive way,” said Mr. Krishnan, who has lived in Beijing since early 2010. [Source]